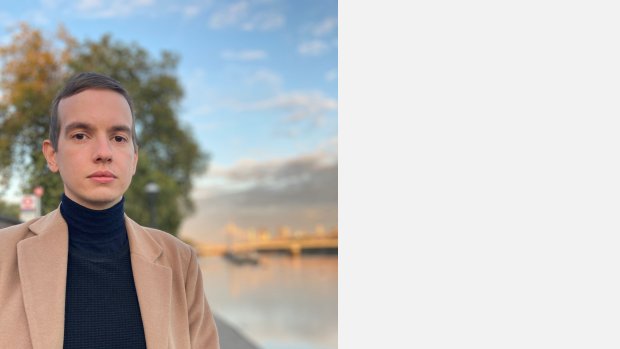 Robin Haigh is a British/Irish composer whose music has been described as “quirky, playful, bold and original…with a highly distinctive musical language and sound” (Ivors Composer Awards), “remarkably discombobulating” (Seen and Heard International), “irreverent” (Chicago Theatre Review), and “completely refreshing” (British Composer Awards). Since winning a British Composer Award in 2017 aged 24, Robin has been commissioned by the LSO, Britten Sinfonia, Royal Philharmonic Society, Ligeti Quartet, and The Hermes Experiment. He went on to win an Ivor Novello Award in 2020, and was nominated for another in 2021.

Robin’s individual approach to music is informed by his early experiences writing for the progressive metal band he played in as a teenager growing up in Newham, East London. His pieces are often based on unusual concepts: his string quartet Samoyeds makes music out of the sounds of howling dogs, Aesop asks orchestral performers to play on recorders, and No One reimagines the harp as a sliding instrument with the aid of a screwdriver. His absurdist comic chamber opera The Man Who Woke Up has been performed in London, Chicago, and Louisville.

As well as working regularly with professional orchestras, ensembles and soloists worldwide, Robin has written extensively for children and amateurs, including a commission for the Sage Gateshead Young Sinfonia as their 2017 composer in residence (Zehner) and an educational piece about the periodic table in collaboration with the European Chemical Society (Hydrogen Helium Etcetera). Fergal is Fuming! was written for the LSO’s under 5’s concerts in response to a book by Robert Starling, and the 2021 piece THREE LITTLE MAMMOTHS was commissioned by the Marsyas Trio to a text by Eoin McLaughlin.

Robin studied at Goldsmiths College and the Royal Academy of Music with teachers including Dmitri Smirnov, Edmund Finnis, and David Sawer, and has worked as an assistant to Sir Harrison Birtwistle. He is coming to the end of an AHRC funded PhD at the University of York supervised by Martin Suckling, and actively teaches composition privately.