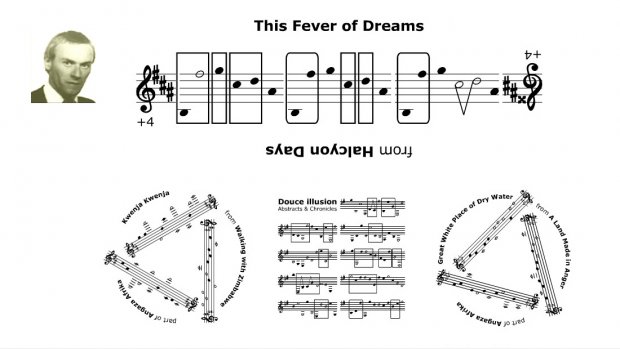 Richard Cooke's music explores a variety of non-narrative structures in which the linear development of idea or argument has been abandoned; instead the focus of attention shifts almost casually as if viewing an object or landscape from a new perspective or in a different light.

The influence of the spatial arts is evident everywhere but in spite (or perhaps because) of this, the music is concerned above all with our perception of time - questioning the nature of change, chance and coincidence - and with ideas of precognition and conflicting memories. Thus all pieces are open-form (allowing performers choice in the ordering and shaping of events) and are of flexible duration and instrumentation; this freedom is reflected in the highly visual layout of the scores, whose terse notation is designed to fire the imagination of players and to lay bare the methods of composition.

Landscapes - real and imaginary, literary, mythical, magical - dominate these sound-worlds and biotopes. Textures are based not so much on repetition as on reconstruction, mimicry and paraphrase, while pitch-class set theory is important as a means of broadening the harmonic palette and pushing the boundaries of traditional tonality. Some pieces, notably in Amèriques, transpose and recombine pitch structures, kaleidoscope-like, to conjure up new background harmonies or soundscapes. Others are impelled by the so-called chaotic patterns associated with natural processes and employ huge leaps in register to suggest a myriad of unfurling melodies or "journeys". Canonic and other algorithmic devices abound - mirrors (retrograde and inversion), transposition, alternative "key" signatures and multiple metronome markings - as a means of generating a hoard of new but kindred ideas.

Two types of listening are important here: lateral (between voices or layers) and linear (over time). Certain pieces, such as Mélopée, vary the volume, reverberation depth and stereo panning of each instrument to simulate a movement of sound in 3D space; these obviously require good speakers. Others, e.g. Odes de Ricardo Reis, include an audio drop-shadow - a parallel layer in which the same music is played by instruments of ill-defined pitch.