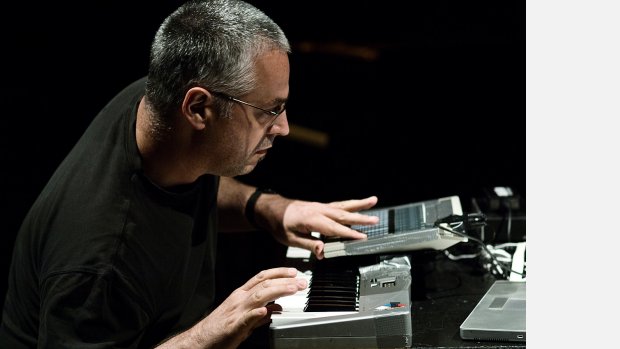 Richard Barrett (Swansea, 1959) is internationally active as composer and performer, and also teaches at the Institute of Sonology in Den Haag and at the Academy of Creative and Performing Arts at Leiden University.

His work encompasses a range from free improvisation to intricately-notated scores, and from acoustic chamber music to innovative uses of digital technology. Recent compositions include close-up for electroacoustic sextet, written for Ensemble Studio6; everything has changed/nothing has changed for orchestra, given its premiere by the SWR Symphony Orchestra conducted by Peter Rundel in February 2017; and the first instalment of natural causes, a work in progress for the ensemble Musikfabrik, given its premiere in May 2017. Current projects include new works for ELISION, with whom Richard Barrett has been working regularly since 1990, and for the Los Angeles-based ensemble gnarwhallaby.

Ongoing performative collaborations include with Paul Obermayer (in FURT), Evan Parker, and several other improvising ensembles such as SKEIN (with Achim Kaufmann, Frank Gratkowski, Wilbert de Joode and others) and Colophony (with Jon Rose and Meinrad Kneer). Richard Barrett’s principal composition teacher was Peter Wiegold, and he currently resides in Belgrade. His work as composer and performer is documented on over forty CDs, including seven discs devoted to his compositions and nine by FURT.