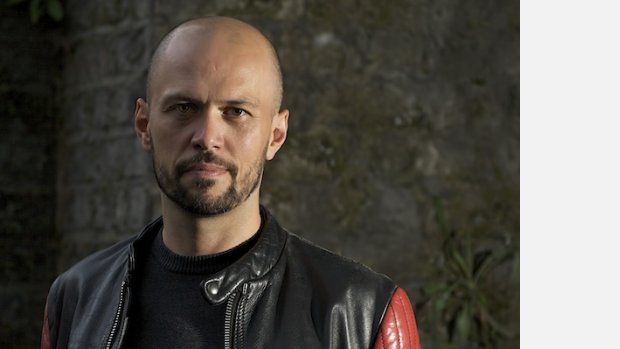 Richard Baker is a leading figure on the British contemporary music scene as one of the foremost composer-conductors of his generation. He studied composition in the Netherlands with Louis Andriessen and in London with John Woolrich, and first drew significant attention with two early works – a trio, Los Rábanos (1998), performed and broadcast widely by the Composers Ensemble, and the remarkable Learning to Fly (1999), a basset clarinet concerto premiered by the London Sinfonietta and Timothy Lines.

The position of New Music Fellow at Kettle’s Yard, Cambridge (2001–3) inaugurated an important strand of work as a concert curator and programme adviser as well as supporting Richard’s progress as a composer. Subsequent years yielded chamber music, a brace of short choral pieces and a number of songs and song cycles – notably Slow passage, low prospect (2004), commissioned by the Aldeburgh Festival for Christopher Purves and Andrew West, and Written on a train (2006) for Christianne Stotijn and a small ensemble led by Christian Tetzlaff.

Hommagesquisse, typically characterful and inventive, was commissioned by Birmingham Contemporary Music Group – with whom Richard also has a strong relationship as conductor – to mark Pierre Boulez’s visit to that city in 2008. In 2010 Baker’s music was featured in the Philharmonia’s Music of Today series, and the same year he wrote Gaming, a substantial chamber work for cello, marimba and piano, to a commission from the New York-based trio Real Quiet. His second BCMG commission, The Tyranny of Fun, was premiered in February 2013, and led Andrew Clements of the Guardian to comment on ‘how assured Baker’s ensemble writing is, and how vividly it fleshes out its structural frame’.  ‘Tyranny’ was nominated for an RPS award in the chamber scale category in May 2014.  He is currently writing a string trio and a work for solo harp.

As a conductor, Richard works regularly with the leading composers of our day. In May 2011 he conducted Gerald Barry’s opera The Intelligence Park in Dublin, to high acclaim. In autumn 2012 he led English Touring Opera’s admired production of Maxwell Davies’ The Lighthouse and in spring 2013 returned to Gerald Barry for the Badisches Staatstheater Karlsruhe’s double-bill of Handel’s The Triumph of Time and Truth and Barry’s The Triumph of Beauty and Deceit, with Opernglas writing of the latter that ‘Richard Baker led the … Badische Staatskapelle with breathtaking virtuosity through this intricate, challenging score’. The 2012–13 season also saw his debuts with both the BBC Scottish Symphony Orchestra and BBC National Orchestra of Wales, adding to existing relationships with ensembles including the London Sinfonietta, BCMG, Britten Sinfonia, Composers Ensemble and Apartment House. He has conducted at the Huddersfield Festival and at Ultraschall in Berlin, and is a regular collaborator for the BBC’s Total Immersion days, where he has conducted portrait concerts of Stockhausen, George Crumb, James MacMillan, Jonathan Harvey and, most recently, Oliver Knussen. In March 2014 he conducted a double-bill of new works by Francisco Coll and Elspeth Brooke at Aldeburgh, the Linbury Studio (Royal Opera House) and Opera North (‘the wonderfully assured conducting of Richard Baker’  Guy Damman, Times).    He was immediately reinvited for the March 2015 production of ‘The Virtues of Things’ by Matt Rogers.

Born in the West Midlands, a chorister at Lichfield Cathedral and an undergraduate at Oxford University, Richard has also been a professor of composition at the Guildhall School of Music & Drama.