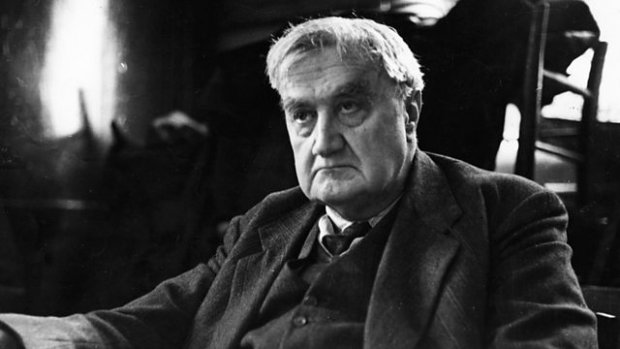 Ralph Vaughan Williams was born in Down Ampney, Gloucestershire on 12 October 1872. He was related to the Darwin and Wedgwood families and grew up in an atmosphere of Liberalism, where he was encouraged to pursue his musical interests.

He read History at Cambridge and went to the Royal College of Music where his teachers were Parry, Wood, and Stanford. He then went on to study with Bruch in Berlin, and Ravel in Paris.

Vaughan Williams's wide-ranging musical activities greatly enhanced English musical life but they have also contributed to the mistaken view that his compositional work was in some way parochial. He believed in the value of music education and wrote practical competition pieces, serviceable church music, and with the 49th Parallel (1940-41) he found a new outlet in writing for film. His profoundly disturbing Symphony No.6 (1948) received international acclaim with more than a hundred performances in a little over two years.

Although one of his first works to achieve success, Norfolk Rhapsody No.1 (1906), makes use of folksong, he rarely incorporated such material directly into his orchestral and instrumental compositions. However, his enthusiasm for folksong (he collected over 800 examples) undoubtedly influenced his compositional language, as did his interest in Elizabethan and Jacobean music.

His great sensitivity to the 20th-century human condition, his flexibility in writing for all levels of music making, and his unquestionably great imagination combine to make him one of the key figures in 20th century music.

Vaughan Williams died on 26 August 1958 and his ashes were interred at Westminster Abbey.

Since the composer’s death there have been a number of new publications. These have either been those works that were not made available during his lifetime, or arrangements of existing pieces. Publications include Norfolk Rhapsody No. 2 (completed and edited by Stephen Hogger), hire materials for Four Last Songs (orchestrated by Anthony Payne), and A Road All Paved with Stars (a single-movement orchestral work arranged by Adrian Williams incorporating the finest music of Vaughan Williams's opera The Poisoned Kiss).

Newly published in 2018, around the 60th anniversary of the composer's death, include Fat Knight – a seven-movement orchestral suite, drawing on the opera Sir John in Love (Fat Knight was the opera's original title), completed by Martin Yates from the composer's two-piano score; and the first publication of the complete music the composer wrote for the film Scott of the Antarctic. Some of the latter became more widely known with the publication of his Sinfonia Antarctica. New arrangements of particular interest include the cantata Dona Nobis Pacem in a reduced orchestra version, and new arrangements of the ever-popular The Lark Ascending for both string quartet and sextet.