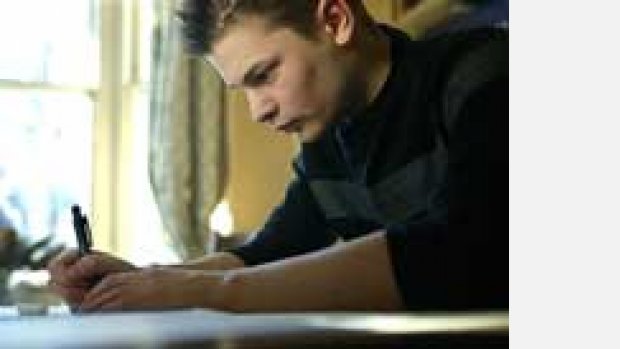 Born in Canterbury in 1979, Phillip Neil Martin received a Foundation Scholarship to study his BMus with Julian Anderson at the Royal College of Music, graduating with First Class Honours in 2002. Phillip studied harmony and counterpoint with Hugh Wood and in masterclasses with George Benjamin and Jonathan Harvey. He returned to read his MMus with a scholarship supported by a Constant & Kit Lambert Award, the AHRB, Countess of Munster Trust, RVW Trust and Mrs. Manja Leigh, graduating with Distinction in 2004. Phillip was awarded the Worshipful Company of Musicians Silver Medal for overall excellencePhillip attended the Britten-Pears Young Artist Programme (2001 & 2002), IRCAM's one-month "Composition and Computer Music Course" in Paris (2006) and the spnm's "Music for Theatre" multimedia residency with "Theatre Cryptic", Glasgow (2006). Selected fellowships include the Japan Foundation's "Uchida Fellowship" (2004) a three-month period of study in Japan where Phillip researched gagaku, traditional Japanese court music. Phillip has won numerous awards including the "Royal Philharmonic Society Composition Prize 2003". He was also the youngest finalist in the "Toru Takemitsu International Composition Competition 2003" with his first orchestral piece Nights Bright DaysPhillip's music is performed widely in Europe, America and Asia by likes of the Tokyo Philharmonic Orchestra, London Philharmonic Orchestra, Philharmonia Orchestra, London Sinfonietta, Tokyo Sinfonietta, Nash Ensemble, Schubert Ensemble, BBC Singers, Zephyr String Quartet, Paragon Ensemble, Okeanos, Yukawa-Chan Piano Duo, Jenny Lin, Sarah Nicolls and Joanna MacGregor. Festival performances include the ISCM World Music Days, Gaudeamus Music Week, Cheltenham, Aldeburgh, Spitalfields and City of London Festivals, Music of Today Series, Suntory Music Foundation's Summer Festival; recently at venues including the Wigmore Hall, Barbican, Royal Festival Hall, Queen Elizabeth Hall, Tokyo Opera City Hall and Suntory Hall, with broadcasts by BBC Television, BBC Radio 3, Dutch Radio, Belgium Radio and NHK Japan.Recent events include the world premiere of Standing Water for 12 players commissioned and performed by the Philharmonia Orchestra's "Music of Today" series at the Queen Elizabeth Hall, London (2006); Stilled... for Piano Quartet, premiered and commissioned by the Schubert Ensemble in Birmingham (2006); and Black & White for 4 taiko drummers, electronics, fashion and architecture commissioned by the City of London Festival (2006). Selected future events include an installation and fashion show at London Fashion Week (2007) for the London College of Fashion's Centenary celebrations at the Royal Academy, London; a new work for the Yukawa-Chan Piano Duo to be premiered at the Wigmore Hall (late 2006) and Two Reflections on Milton for solo piano will be released on CD by Christine Yoshikawa in America (late 2006).Phillip is currently "Music Creator in Residence" at the London College of Fashion, a flagship residency supported the PRS Foundation, and he holds the "Constant & Kit Lambert Junior Fellowship" at the Royal College of Music.For more information please visit: www.phillipneilmartin.com

'Philosophies of space and time have become one of the primary focal points of my recent work; my exploration into concepts of time, the Western marking of time as a line, the Eastern concept as cycles of accumulation, and the collision of these two aesthetics.
I have become enthralled with the perception of how musical objects are connected within time and their movement within space. The 'consequence' of material transforming over time and the paradox of perceiving the focal point or the 'cause' of the initial stimuli of the work when time seemingly accumulates in space. I'm constantly absorbed searching for ways to create musical ecosystems— a three dimensional music that adds up vertically, horizontally and with harmonic direction that takes one on a journey, and conversely the transformation of the material when the music becomes intrinsic to the space holding time.
Perhaps a diamond submerged in water is the best analogy: to make music that has multiple shards of light reflecting different facets of the diamond, but ultimately the summation of these fragmented views are of a self-contained whole which may only be fleetingly visible as the water makes the primary object seem to be in constant flux.'
Phillip Neil Martin

'Phillip Neil Martin's romanticism, that is occasionally woven into the music, was astoundingly beautiful. The phrases where the violins played like an elegy reminded me of Bartók… The stormy tutti at the climax and the episode in the coda, played peacefully by the solo violin and woodwinds was well-refined. I personally value this piece as the best of all.'
The Toru Takemitsu International Composition Award 2003 by Hidekuni Maeda, the 'Ongaku-no Tomo' Music Magazine. Translation by Mariko Inaba- the Japan Foundation

'Phillip Neil Martin's An Outburst of Time was … striking and expressively charged. '
Andrew Clements, The Guardian