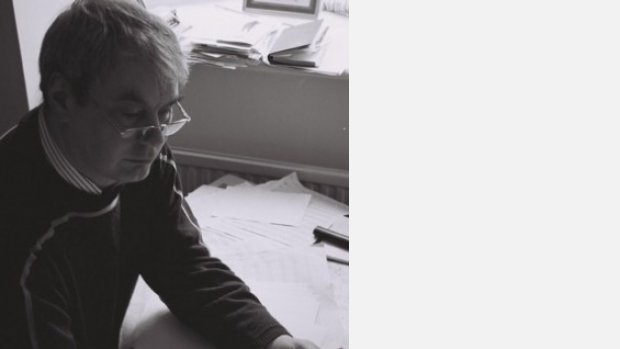 Philip Grange’s earliest published compositions date from the late 1970s and include Cimmerian Nocturne (1979), often regarded as his “opus 1”. This work was written for The Fires of London, the ensemble directed by Peter Maxwell Davies and grew out of Grange’s studies with Maxwell Davies both privately and at the Dartington Summer School of Music between 1975 and 1981. The piece demonstrates Grange’s interest in structures informed by literary or fine art sources, in this case Conrad’s novella Heart of Darkness. Such a dialogue between the arts continued with Grange’s second Fires of London commission Variations (1985), its structure reflecting that of Golding’s Darkness Visible. This work was written while Grange was Fellow in the Creative Arts at Trinity College, Cambridge between 1985 and 1987. Both commissions have been performed and broadcast widely; for Cimmerian Nocturne this has included a performance at the BBC Proms, while Variations was featured at the International Rostrum of Composers in Paris in 1988.

Other significant works from the 1980s include The Kingdom of Bones (1983) and Concerto for Orchestra: Labyrinthine Images (1988), the latter completed as Grange took up the position of Northern Arts Composer Fellow at Durham University (1988/89). The 1990s began with two BBC commissions in quick succession, the large-scale Focus and Fade (1992) written for the BBC Symphony Orchestra who premiered it under Andrew Davis and Lowry Dreamscape for brass band. The latter was informed by the work of the Salford-based artist L. S. Lowry (1992), and the use of artistic sources was continued with the Piano Trio: Homage to Chagall (1995). The end of the 90s saw Grange complete the first of two major works for wind band, Concerto for solo clarinet radical and symphonic wind band, Shēng Shēng Bù Shí (1997/2000). Written to a commission from the Royal Northern College of Music and featuring Grange’s former clarinet teacher Alan Hacker, it was followed in 2009 by Cloud Atlas. This was commissioned by the National Youth Wind Ensemble and their conductor Phillip Scott and is based on the structure of David Mitchell’s eponymous novel. It won the 2010 BASCA award in the wind band/brass band category.

Over the past 15 years Grange has also completed Eclipsing (2004), a large-scale orchestral piece. Commissioned by the BBC for the BBC Philharmonic and premiered by them under Vassily Sinaisky; the work was also performed by the orchestra under Andris Nelsons in a BBC concert celebrating the composer’s fiftieth birthday. Also dating from this period are three string quartets; the first two were completed in 2003 for the Kreutzer and Lindsay Quartets while the third, Ghosts of Great Violence (2011/13), was written for the Quatuor Danel. More recently he has composed the large-scale chamber work Shifting Thresholds (2016) for the ensemble Gemini, Carved Forms (2017) for flute and accordion and a Violin Concerto (2019). The latter was commissioned by the BBC for Carolin Widmann and the BBC Philharmonic who premiered the work under Ben Gernon at the Bridgewater Hall in Manchester in November 2019.

Grange’s compositions have been performed and broadcast throughout the world. In the UK this has resulted in performances at many major festivals including Aldeburgh, Huddersfield and Cheltenham. Even while a student his works were receiving performances in Germany and Italy which, by the mid-80s also included the USA. In the late 90s this extended to Taiwan and, later China. In 2002 he was a featured composer at the Bergen festival in Norway and in 2003 he was featured at a festival in Tainan and had significant performances of his first string quartet in Germany and Denmark. In 2010 he completed the chamber orchestra piece Adopted Path to a commission from Greenwood, USA and was featured composer at the 2013, 2014, 2015 and 2016 Festival Composición UANL in Monterrey, Mexico and the 2014 Pan Music Festival in Seoul, South

Korea. Other recent performances include Ghosts of Great Violence at the 2013 Festival with Innovative Expressions in Taipei, Taiwan in 2013 and the 2015 Musiciens des Trenchées Festival and the Festival Europeen de Quatuor a Cordes in Tournai, Belgium. In 2020 his A Puzzle of Shadows was given its first Russian performance at the A Voice Between Nations events in St Petersburg.

A significant number of Grange’s compositions have been recorded for CD. These include five portrait CDs starting with Dark Labyrinths released on the Black Box label in 2000 (awarded Classical Album of the Week in Music Weekly and critic’s choice in The Gramophone), followed by Darkness Visible in 2006 on the Metier label, (also a critic’s choice in The Gramophone), Zeitgeist released on Campion in 2007, Cloud Atlas released on Prima Facie in 2013 and Homage released on Metier in 2019. Grange’s principle publisher is Edition Peters.