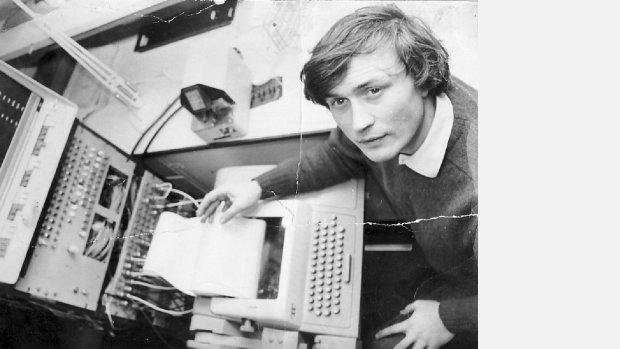 Peter Zinovieff (born 1933) is a British engineer and composer, whose EMS company made the synthesizer in the late 1960s.

Zinovieff was born on 26 January 1933; his parents, Leo Zinovieff and Sofka, née Princess Sophia Dolgorouky, were both Russian aristocrats, who met in London after their families had emigrated to escape the Russian Revolution and soon divorced. During World War II he and his brother Ian lived with their grandparents in Guildford and then with their father in Sussex. He attended Guildford Royal Grammar School Gordonstoun School Oxford University, where he earned a doctorate in geology.

In 1966–67, Zinovieff, Delia Derbyshire and Brian Hodgson ran Unit Delta Plus, an organisation to create and promote electronic music. It was based in the studio Zinovieff had built, in a shed at his house in Putney. In 1969, Zinovieff formed EMS with Cockerell and Tristram Cary. At the end of the 1960s, EMS Ltd. was one of four companies offering commercial synthesizers, the others being ARP,Buchla,and Moog. In the 1970s Zinovieff became interested in the video synthesizer developed by Robert Monkhouse, and EMS produced it as the Spectron. Zinovieff wrote the libretto for Harrison Birtwistle's opera The Mask of Orpheus and also the words for Nenia: The Death of Orpheus (1970). The section Tristan's Folly in Tristan (1975) by Hans Werner Henze included a tape by Zinovieff.

He continues to work as a composer of electronic music.