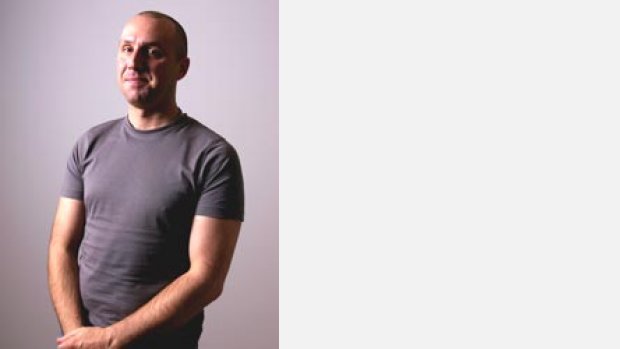 Paul Fretwell (b.1972) is a composer and sonic adventurer who walks along the edge of our musical experiences, endowing the everyday, the mundane, the noisy, the quiet, and the unheard with a new musical value.  He has produced pieces for traditional instruments from full orchestra to small ensemble, as well as works which use computer technology to transform and develop sound.  His music is dramatic, sensuous and evocative, using drones, textures, grating timbres and luscious harmony to create a beguiling sonic vocabulary that bewitches the listener.  Many of his works have been performed in festivals and concerts around the world.  Two of his electroacoustic pieces have been released on CD, Doors Close and A Fragmented History, both on Audio Research Editions (Hope and Trace).
His musical education began early, and as a child he was awarded a place at Chetham’s School of Music, where he studied trombone, piano and composition. Later he attended the University of Birmingham, where he gained a first class honours degree specialising in composition.  More recently, he has completed a Masters and PhD at City University, London.  He has taught composition in a wide variety of institutions including the Royal Academy of Music, University of Hertfordshire, Bath Spa University, and in September 2005 was appointed to a position at the newly-founded Centre for Music Technology at the University of Kent, where he is contributing to the development of a range of degrees and research programmes.
Paul Fretwell is an spnm shortlisted composer.