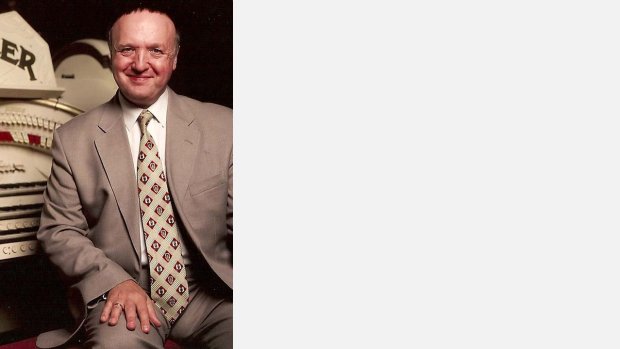 Nigel was born in Manchester. His father was a church organist, and also a lover of the theatre organ. At an early age, Nigel was taken to hear the great Reginald Dixon playing the Tower Ballroom Wurlitzer organ, and was instantly 'hooked'.

He first broadcast in 1971, and on 3rd March 1980, when still only in his mid twenties, took over from Robin Richmond as the presenter of the BBC Radio 2 programme The Organist Entertains. The programme itself has now been running for 33 years and can be heard on a Tuesday evening at 8pm.

Nigel is equally at home on church organs and electronics, particularly Hammonds, and has just issued a CD playing one of these instruments. Cathedrals organs too have received the very special Ogden treatment, with a most enjoyable recording made recently at the magnificent organ in Lincoln Cathedral.

However, the theatre organ is Nigel Ogden's first love, and he has recorded many CDs at the organ that first sparked his imagination - the Blackpool Tower Wurlitzer.

The theatre organ lends itself to music of the 1930s, and Nigel has wonderfully expressed this era in his composition Art Deco 'Three-piece' Suite. Other works include several in Stainer & Bell's 'light organ music series'. Among these are Afternoon tea with the Duchess, written to commemorate the fiftieth anniversary of the installation of the five-manual Compton organ at the Odeon Cinema, Leicester Square and the fun piece Scherzo for the White Rabbit.

In a more serious vein, Nigel has written several stirring marches, including England's Glory, New Era composed to inaugurate a series of lunchtime concerts at Manchester Town Hall, and Our Squadron Leader.

His talents, both as a composer and performer, appear to have no end, and he has also penned a delightful Christmas carol Born for us on Christmas Day, premiered and recorded by the Altrincham Choral Society.