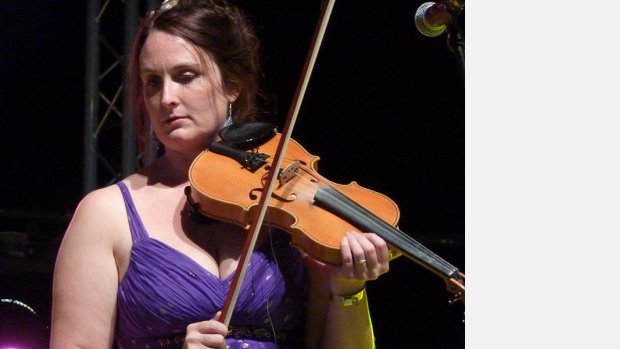 Nancy Kerr (1975-) is an English folk musician, songwriter and vocalist who specialises in the fiddle.

Kerr is amongst the most celebrated folk musicians of her generation, an outstanding songwriter and one of England’s best-known folk fiddle players. The daughter of London-born singer-songwriter Sandra Kerr and Northumbrian piper Ron Elliott, she came to prominence in the early 1990s via a musical partnership with fellow fiddle player Eliza Carthy. The duo produced two albums: Eliza Carthy & Nancy Kerr (1993) and Shape of Scrape (1995).

Since 1995 Kerr has mostly worked in a duo with Australian bouzouki player and singer James Fagan whom she married in 2007. Between 1997 and 2008 they released six albums on the Fellside label: “Starry Gazy Pie” (1997), “Scalene” (with Sandra Kerr) (1998), “Steely Water” (1999), “Between The Dark and Light” (2002), “Strands of Gold” (2006) and “Station House” (with Robert Harbron) (2008). 2010 saw the production of their first completely original collection of songs – “Twice Reflected Sun”, released on Navigator Records. They have toured internationally, most notably in the British Isles, Canada, Australia, New Zealand and Japan and have thousands of fans. Despite now having two children they continue to work and tour constantly from their home base in Sheffield and their duo shows are now special and sought-after events.

Nancy Kerr has won 6 Folk Awards including BBC Radio 2’s folk singer of the year in 2015. She is in constant demand as a songwriter, performer and teacher. As well as the duo with James, her recent work has included the multi-award-winning “The Full English” band, “The Elizabethan Session”, Melrose Quartet and the trio Simpson Cutting Kerr (with Martin Simpson and Andy Cutting).

In November 2015, Kerr was one of four songwriters commissioned by Folk By The Oak and The English Folk Dance and Song Society to write and tour a production called “Sweet Liberties” looking at the history of British parliament and democracy. Their CD “Sweet Liberties” will be released October 2016.

Her emergence as a writer of rare style has drawn comparisons to William Blake in her reawakening of a radical folk mythology as a backdrop for contemporary narratives about love and conflict, motherhood, migration, hardship and jubilation, and the tensions between rural and urban life.