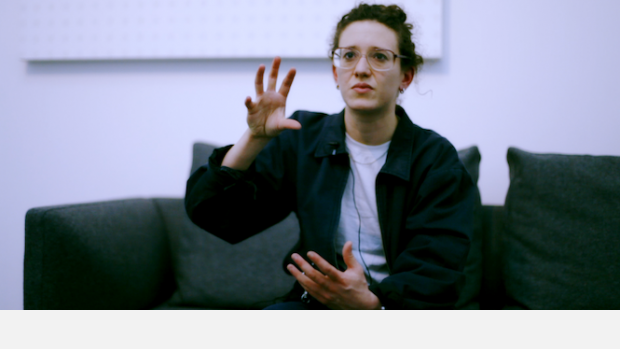 Mica Levi (1987-), also known as Micachu, is a British composer and performer.

First known for her work as part of experimental DIY outfit ‘Micachu and The Shapes’, Levi has gone onto work extensively in film music, receiving a BAFTA nomination for her score to ‘Under the Skin’ (2013). She was recently nominated for a second time for her music to the film Jackie (2016), a biopic focusing on Jackie Kennedy.

Originally classically trained at the Purcell Music School, Levi’s music spans many different styles and approaches. Alongside her work in film, she has been commissioned by the London Philharmonic Orchestra (2008), contributed to Phil Collins’ ‘Ceremony’ at Manchester International Festival (2017), co-written with electronic artist Tirzah, released three albums with her band The Shapes, and compiled mixtapes that have become a staple on the London Club Scene (Filthy Friends, 2009).

Levi’s music often focuses on unconventional sounds, and her band The Shapes are well known for recording with household or handmade instruments such as hoovers, decks of cards and bowed CD racks.