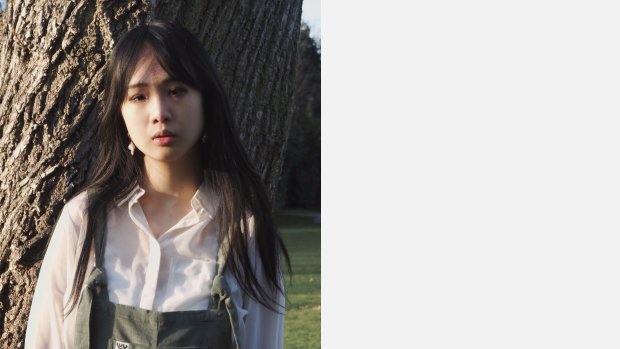 May Wong is a Hong Kong-born songwriter, composer and visual artist currently based in Birmingham, UK. She composes under her birth name, and everything else under the moniker MAY CHI.

May’s compositional works draw from her intrinsic connection with nature, saudade (nostalgic yearning) and catharsis. Her works explores various aspects of electroacoustic and ambient music production, and plays around with the limitations offered by traditional instruments and ensembles to create and mould various sounds, timbres and ambiences. She has composed for the Bristol University Music Society (BUMS), Flauguissimo Duo, Quatuor Bozzini, Fidelio Trio, Thallein Ensemble and Tresonant. She recently completed a Composition MMus at Royal Birmingham Conservatoire, for which she was awarded a Distinction, and was the recipient of a scholarship for the duration of her degree. She has studied with composers including Sean Clancy, Amber Priestley, John Pickard, Neil Farwell, Neil Stemp, Ed Bennett, James Dooley, Richard Ayres and Mantas Krukauskas.

A defier of genre boundaries, MAY CHI’s songwriting blends Alternative Rock, Indie Folk and Ambient elements to create uniquely ethereal and rustic soundscapes. Her introspective and vulnerable penmanship evokes the feelings of saudade and catharsis in her lyricism. Her songs have been featured on BBC Introducing and AmazingRadio, and she has performed at events such as RBC’s International Women’s Day Festival in 2020 and Leon Trimble’s 2021 Stryx Gallery Residency.

As a keen visual artist, she creates artworks and short videos in accompaniment of her music and experiments with film photography in her spare time. She is looking to close the gap between her art and music practises in future artistic endeavours.