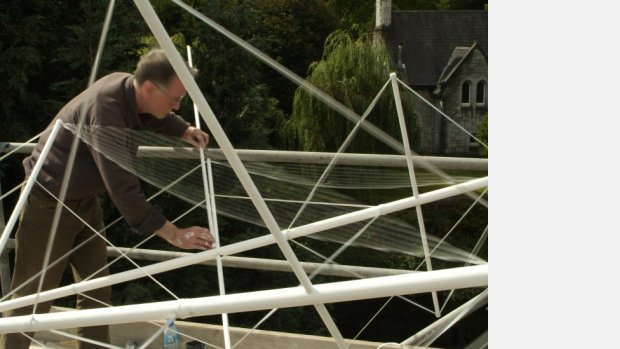 Max Eastley is an internationally recognised artist who combines kinetic sculpture and sound into a unique art form. His sculptures exist on the border between the natural environment and human intervention and use the driving forces of electricity, wind, water and ice. He has exhibited both interior and exterior works internationally. His work is represented in the permanent collection of the Centre for Art and Media, Karlsruhe, Germany and private collections.

Max is an artist with the Cape Farewell Climate Change Project (http://www.capefarewell.com). From 2010 to 2013 he was an Arts and Humanities Research Council Senior Researcher at Oxford Brookes University, investigating Aeolian phenomena through artistic practice and historical research. In 2014 he was City Sound Artist in Bonn, Germany and in 2017 he was a guest of the DAAD in Berlin, Germany.

He is well known as an improvising musician and has played many solo concerts as well as in combinations with musicians such as David Toop, Evan Parker, Steve Beresford, Alex Kolkowski, Rhodri Davies and John Butcher, Ute Wasserman, Phil Minton, Axel Dörner, Nicola Hein.