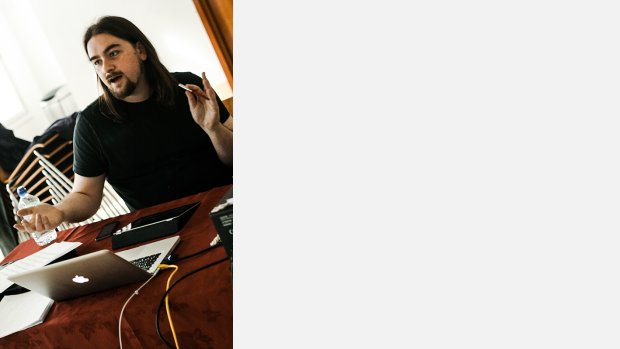 Matthew Whiteside is a 'cerebral composer and sound designer who’s creating classical-crossover works to challenge the 21st century consensus.' Based in Glasgow he writes music for concert, film and collaborative installations often-using live electronics within his work. He is currently working with flutist Carla Rees to write a new piece for contra-bass flute and electronics with the support of Creative Scotland and Help Musicians Career Development Bursary.

His music has been performed across the world including Dublin’s National Concert Hall, Glasgow City Halls, Salem Artworks in New York and the Belfast International Festival at Queen’s. He has recieved commissions from Cottiers Chamber Project for Always Ever Unknowable for choir, vocal trio and trombone quartet, Lorimer Productions for Nobilis Humilis for Cappella Nova and sound festival and R-Space gallery to collaborate with Dominika Mayovich to create a sound/art interactive installation.

Matthew’s recent work Solo for Viola D’amore and Live Electronics was described as having the overall effect of ‘one of meditation – a Japanese stone garden whose raked ripples have been brought into sound’ by Musicweb International and features on his debut album Dichroic Light released in 2015 and funded by Creative Scotland.

He composed the music for BBC 4 documentary 'Michael Palin's Quest for Artemisia' presented by Michael Palin, to be broadcast 28th December 2015. He has scored two feature films (Anna Unbound and The Loudest Sound) and a short (Edward). In 2013 he was selected to attend both Ghent Film Festival and Edinburgh International Film Festivals sound lab programmes.