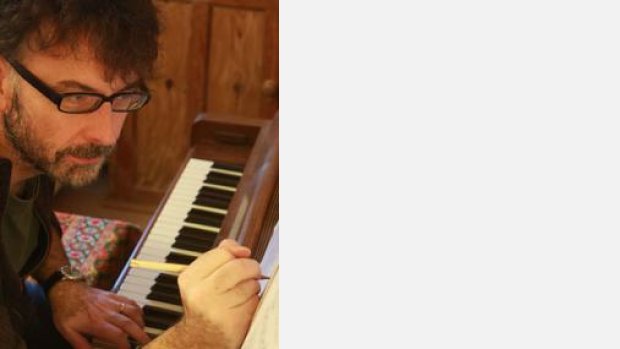 Matthew King has established a reputation as one of the leading composers of his generation. His work has been described variously as “music of distinctive beauty with disarming theatre sense” (Independent on Sunday), “exhilarating” (The Sunday Times) and “teeming with ideas…with a Reich-like jauntiness of rhythm and texture” (The Times).

He is an exceptionally versatile composer, equally at home writing orchestral music, operas, chamber pieces, piano music, and works for Jazz groups. He describes composing today as “a universe of marvels, with virtually infinite wonders to be discovered. But being a composer today is not easy, confronted as we are, by the disconcerting multitude of genres available to us at the click of a button. The old dogmas and ideologies are passing away, and we are surrounded by a raft of styles: popular, arcane, exotic, ancient, modern…whilst hovering above us, remain the god-like spectres of the past: Bach, Mozart, Ravel, Messiaen, etc… whose presence we cannot escape! Composition today is living with this tension.”

He has written a number of innovative site-specific pieces including the enormous King’s Wood Symphony (commissioned by the Wigmore Hall). Among his smaller works, Sonatas for piano solo, takes only a minute to perform and is a succession of 32 bars, quoting from each of Beethoven’s 32 piano sonatas in chronological order.

Matthew is also an exceptional pianist and improviser. While still an undergraduate at the University of York, he was a founder member of the ensemble Jane’s Minstrels and was piano soloist in Messiaen’s Oiseaux Exotiques at the Huddersfield Festival. His performance of Liszt’s Sonata was described by the musicologist, Arnold Whittal as “a thrilling reimagining of the work”.

He has presented a number of programmes for BBC Radio 3 and Radio 4. He has taught composition at the Yehudi Menuhin School, and is a composition professor at the Guildhall School of Music and Drama.