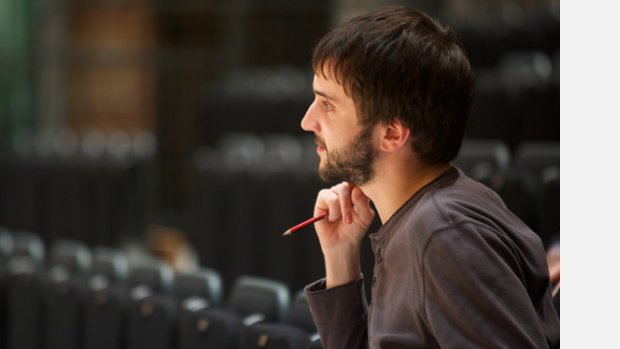 Born in London, Matthew Kaner studied Music at King’s College London and was jointly awarded the Purcell Prize for graduating top of his year in 2008. He then gained a distinction for his Masters at the Guildhall School of Music & Drama, supervised by Julian Anderson, where he subsequently continued his studies as a Composition Fellow for a year. He has been teaching on various undergraduate courses at both King’s and the Guildhall School since 2009, becoming a Professor of Composition at the latter in 2013, in which year he was also made a Fellow of the Higher Education Academy.

Matthew has composed works for the London Symphony Orchestra, London Sinfonietta, Philharmonia, members of the BBC Symphony Orchestra, the Workers Union, Siglo de Oro, King’s College London Choir and Orfea amongst others, and soloists including Richard Uttley, Julia Samojlo and Sam Corkin. His music has been performed at various venues in the UK and abroad, including Seiji Ozawa Hall, the Barbican, the Royal Festival Hall, Wigmore Hall, the Purcell Room, LSO St. Luke’s and Snape Maltings. It has also been broadcast live on BBC Radio 3 and featured in the Aldeburgh, Norfolk & Norwich, City of London and Victoria International Music Festivals.

In the summer of 2012 Matthew was the Margaret Lee Crofts Fellow in Composition at the Tanglewood Music Center, Massachusetts, where he worked and studied with composers George Benjamin, John Harbison, Oliver Knussen and Michael Gandolfi. He attended the Britten-Pears Contemporary Composition course in 2011. In 2013, he was one of the winners of the Royal Philharmonic Society Composition Prize and was consequently commissioned to write a new work for the Philharmonia’s Music of Today series,  premiered in the Royal Festival Hall on 31 May 2014. He was also the recipient of a London Sinfonietta Writing the Future chamber commission. His quartet for flute, clarinet, viola and cello, Chants, was premiered in the Purcell Room as part of the New Music Day on December 8, 2013.

Matthew was the 2013 Composer-in-Association with the Workers Union, composing a work with electronics entitled Organum which they premiered with the support of the PRS for Music Foundation, culminating in a final performance at LSO St. Luke’s on 9th November 2013. His commission for the London Symphony Orchestra, The Calligrapher’s Manuscript, was premiered under the baton of Robin Ticciati in the Barbican Hall in September 2013 and received with critical acclaim.