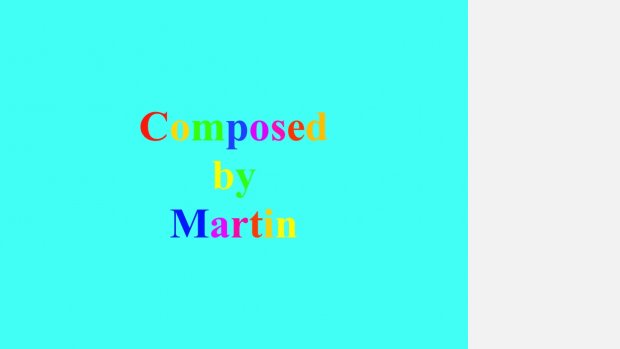 A viola player, Martin studied composition with Patric Standford and Duncan Druce at Bretton Hall College,  graduating with a B.A. degree in 1983.

In 1992 Martin completed his M.Mus. in Music Composition at the University of Leeds, having studied with Julian Rushton, Philip Wilby and David Cooper. During this period of study his String Quartet No.1 was performed by The Allegri Quartet. Hunting Chant for flute and electro-acoustic recording and Hebephrenic (electro-acoustic recording) were included in the lunchtime concert series. Hebephrenic was also selected by Richard Arnell to be performed in Tadcaster. Martin's chamber opera The Release was performed at The University of Leeds Clothworkers' Hall with Vivienne Bailey of Opera North in May 1992.

In 1996, Martin began a Ph.D. course in composition at The University of Leeds. His composition portfolio included two works for orchestra: The Treachery of the Last Sun and Taking The Ghost Road, two string quartets (No.2 and No.3), a Saxophone Quartet, The Birthday Party (flute, clarinet, trumpet, trombone piano), Predators Playing With Their Prey (piano), and his third opera Tom Karble. Martin gained his Ph.D in January 2003.

The Society for the Promotion of New Music selected At A Later Date (flute and percussion) and Bellblock (steel pans) for performance at the 1986 and 1995 Huddersfield Contemporary Music Festivals. The SPNM also selected The Slide Show (for solo trombone) forperformed by Simon Wills at the SPNM event at the 2005 Aldeburgh Festival.

Rozel and Inscription were both performed in the Channel Islands, with Rozel being performed on Channel Television.

In March 2003, Martin's String Quartet No.3 was selected by The London Mozart Players for performance in one of their outreach projects, and the quartet was also performed at Coventry University in 2006.

Martin's Adagio for cello quartet was selected from a Contemporary Music for All "call for scores" to be performed at the CoMA 2015 Summer School.

Martin's Saxophone Quartet and Tango Heat have been performed regularly in the Uk and the United States.

Martin is a member of The Central Composers' Alliance, and his compositions an arrangements are available for perusal and purchase on the Score Exchange website.