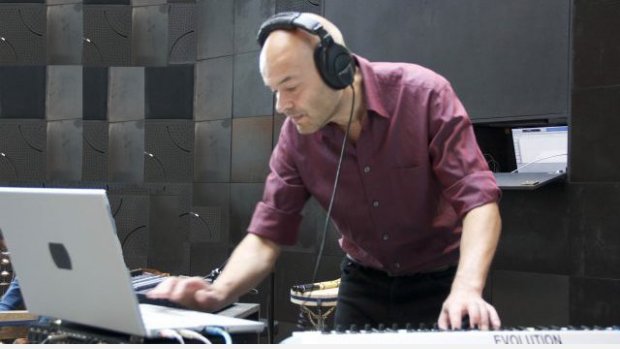 Mario Verandi is an argentinean-born composer, performer and sound artist living in Berlin. He primarily works with new technologies as an aid to exploring and expanding the boundaries of sound, space, perception and meaning. A distinct characteristic of his work is the exploration of the poetic, evocative potential of sounds - both concrete and environmental - and their incorporation in sound compositions, media installations, live performances and radio art pieces.

Mario Verandi studied music at the Music School of the Rosario National University in Argentina. His main teachers were Dante Grela (composition), Aldo Antognazzi (piano), Marta Varela (ear training) and Carlos Castro (argentinean folklore music). At the same time he played piano and keyboards in groups of different styles such as pop, folk, tango and experimental. In 1986 he moved to Barcelona and studied with Gabriel Brncic and Xavier Serra at the Phonos Electroacoustic Music Studios. In 1991 he moved to London and continued his studies with Jonty Harrison at the University of Birmingham (UK) where he completed a Master and a Doctor degree in Electroacoustic music. He carried out additional studies in master classes and workshops with Luc Ferrari, Kevin Volans and Trevor Wishart. In 2000 he moved to Berlin after being awarded a fellowship to take part in the prestigious artists-in-berlin residence programme of the DAAD (German Academic Exchange Service). He has given courses and lectures in music institutions in Europe, USA and LatinAmerica and in 2003-2004 was guest lecturer at the musicology department of the Berlin Free University.