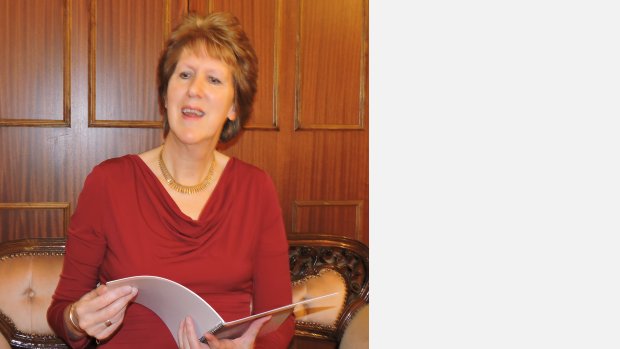 British born “Lydia Kakabadse is a phenomenon and a virtual reincarnation of an earlier music master” (Gapplegate Classical Modern Music). “A very gifted and accessible composer” with “a mastery of counterpoint and a richness of ideas” (Music Web International), Lydia composes mainly choral, vocal and chamber music (as further detailed on her website www.lydiakakabadse.com  Her works have been released on CD under the Naxos and Divine Art labels and have been widely performed, commissioned and broadcast.  They include string quartets, string duet, mixed ensembles, songs, musical dramas, cantata, concert Requiem Mass, as well as choral pieces for mixed choir (SATB), male voices and children's choir. Lydia started piano lessons at the age of 5 and composing at the age of 13. She studied the double bass during her teenage years under the late Ida Carroll OBE and went on to read music at Royal Holloway University of London. She is keen to promote the double bass in all her chamber works, including her string quartets, which are scored for violin, viola, cello and double bass (rather than the traditional set up).  BBC Radio 3 played her string quartet "Russian Tableaux" to mark International Women's Day in 2015 and 2017.  As a result of her Russian/Georgian and Greek/Austrian parentage, Lydia was brought up in the Greek Orthodox and Russian Orthodox traditions, from where she draws inspiration especially for her choral works. Her compositions have been performed by acclaimed chamber ensembles and choirs at numerous UK venues and have been included in music festivals both in the UK and abroad, more recently in the Three Choirs Festival Eucharist (2019) and Chatsworth Arts Festival (2019). Excerpts from her choral album "Cantica Sacra" were included in a dance act on TV show "Britain's Got Talent" in May 2020. An avid Latin enthusiast and also inspired by medieval music, she has written original texts in Latin for her choral/vocal works. She has been included as a Greek heritage classical composer in the “Archive of Classical Greek Composers”.  Lydia also holds a Masters degree in law (distinction) and, in the past, worked as a solicitor in order to fund her many music projects. Her chamber and vocal works are published by Naxos - https://publishing.naxos.com/collections/lydia-kakabadse  Her choral work "I Remember" for children's choir is published by Banks Music Publications - https://www.banksmusicpublications.co.uk/upper-voices/two-voice-parts/i-....   Website www.lydiakakabadse.com