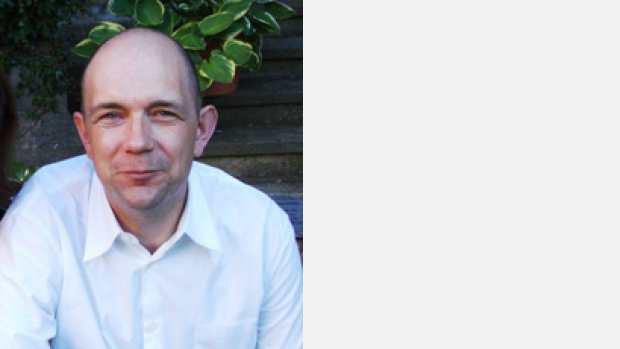 Laurence Crane was born in Oxford in 1961 and studied composition with Peter Nelson and Nigel Osborne at Nottingham University, graduating in 1983. He lives and works in London. His music is mainly written for the concert hall, although his list of works includes pieces written for film, radio, theatre, dance and installation.

He is closely associated with the British ensemble Apartment House, who have to date given around forty performances of his works. He has composed two pieces especially for the ensemble; Riis and John White in Berlin, the latter commissioned in 2003 by the MaerzMusik Festival in Berlin. The personnel of Apartment House include players who have been regular collaborators for many years; clarinettist Andrew Sparling, flautist Nancy Ruffer, pianists Sarah Walker and Philip Thomas, guitarist Alan Thomas and cellist Anton Lukoszevieze, who is the director of the ensemble. Crane's output includes solo works written for some of these performers, including Bobby J, for Alan Thomas, Raimondas Rumsas, for Anton Lukoszevieze, and Sparling, for Andrew Sparling. Apartment House have presented two portrait concerts of his work; in October 1998 at the Three Two Festival in New York City and in October 2001 at The Warehouse in London as part of the BMIC's Cutting Edge series, a concert that was subsequently broadcast on BBC Radio 3's weekly new music programme Hear and Now.

Piano music has been an important feature of his work and pianists who have performed his solo piano pieces include Michael Finnissy, Marc Couroux, Tim Parkinson, halia Myers , Jonathan Powell, Sarah Nicolls, Andrew Zolinsky and John McAlpine. Two of his piano pieces, Chorale for Howard Skempton and Postlude, were commissioned by the Associated Board for publication in the Spectrum series. Michael Finnissy has recorded Crane's complete piano music for future release. Performers of chamber works have included Ruth Wall, Rhodri Davies, Tom Pauwels, Claire Edwardes, Duo Contour, Lore Lixenberg & Dominic Saunders, IXION, Lontano, Noszferatu, COMA, Bradyworks (Montreal), Continuum Ensemble (Toronto), Ensemble Offspring (Sydney) and the London Sinfonietta. The Canadian new music group Ensemble Kore gave a portrait concert of Crane's work in Montreal in September 2005. The Auckland-based ensemble 175 East have given a number of performances in New Zealand, including radio broadcasts of See Our Lake and Sparling NZ on Concert FM. The Dutch group Orkest de ereprijs commissioned Movement for Ensemble in 2002 and gave the premiere in Amsterdam, at the Gaudeamus International Music Week. Following this performance the Ives Ensemble commissioned Movement for 10 Musicians, a new version of the earlier work, for collaboration with Rotterdam Dance Works, which toured the Netherlands in the spring of 2004. Crane has composed two further works for Dutch musicians in 2006; Ullrich 1 and 2 for Orkest de Volharding and West Sussex Folk Material, for the Netherlands Radio Chamber Orchestra. In early 2007 he composed a set of pieces for the Vigani's Cabinet project, a unique three-year programme of new commissions for Queens' College Cambridge.

Laurence Crane's music has been presented at festivals in Britain and abroad, including Bath, Brighton, Cheltenham, Huddersfield, The Cutting Edge (London), MaerzMusik (Berlin), Ultima (Oslo) and ZaterdagMatinee (Amsterdam). Several of his works have been broadcast on BBC Radio 3 including Trio (written for Topologies), See Our Lake (written for IXION and for the first concert of the BMIC's Cutting Edge series), Weirdi (commissioned by Tapestry), Events (commissioned by the BBC for the experimental programme Between the Ears), Four Miniatures (commissioned by Noszferatu) and John White in Berlin (performed by Apartment House at a BBC Invitation Concert).

‘In Laurence Crane's music the material chosen is familiar; mostly consonant, often tonal, triads, elementary chords, old well-used intervals rescued from a previous unjust ignorant redundancy. The familiar sound or image is abstracted by being placed in a new, clean and often isolated context, like a museum glass case. Its innate value is respected by it remaining alone, unornamented and unaffected during the course of the piece by any development or transformation; the image staying as and where it is by being gently reiterated or prolonged so that it holds our full attention.'