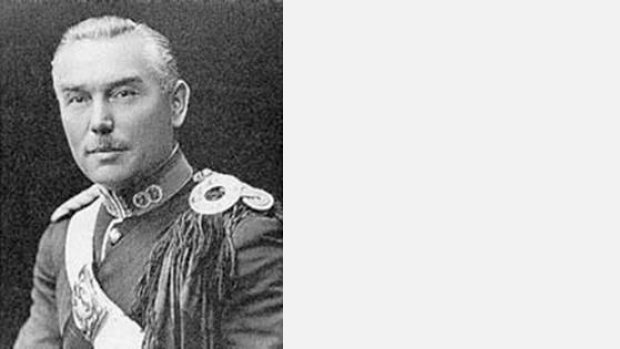 Kenneth Alford, pseudonym of Major Fredrick Joseph Ricketts, was born in London on February 21, 1881. By the time he was fourteen he had lost both of his parents. Yearning for a career in military music, he lied about his age to join the Royal Irish Regiment in 1895.

He remained in the Army until 1927, when he was commissioned into the Royal Marines as a Director of Music. After a total of almost fifty years of service to the Crown, he retired in 1944 in rather poor health and died in the following year on May 15, 1945.

Rickett’s pseudonym was derived from his eldest son, Kenneth; his middle name, Joseph; and his mother’s maiden name, Alford.

During his long military career, he wrote many marches that remain famous to this day. He is renowned as Britain’s “March King” yet unlike John Philip Sousa, who composed at least a hundred and thirty examples, his reputation rests on just eighteen marches. He also wrote a handful of xylophone solos plus a few other non-march pieces and was responsible for many arrangements. But he was his own man. No-one would mistake one of his marches for one of Sousa.

Photo and Biography from http://www.alfordassociation.org/BIOS/bio_Kenneth%20J.%20Alford.htm