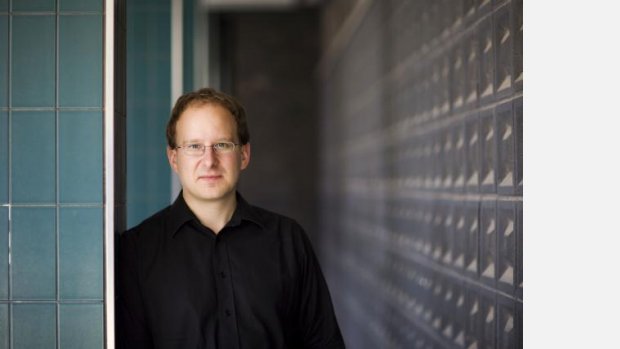 Born in Blackburn in 1978, James Weeks read Music at Queens' College, Cambridge, where he was Organ Scholar, before completing a PhD in Composition at Southampton University, studying with Michael Finnissy. His music is regularly heard across Europe, has been broadcast on German and Dutch radio and BBC Radio 3, and is promoted by the BMIC's New Voices scheme. Recent works have been completed for Alison Balsom, Kürbis, Bloomsbury Trio, Anton Lukoszevieze, EXAUDI and The Hola, and he has been heard at festivals and halls including Purcell Room, Bridgewater Hall, City of London Festival, Dartington, Vale of Glamorgan Festival, Soundwaves Brighton, Gaudeamus and Mafra (Portugal). In February 2007 his music was the subject of a portrait concert by Kürbis Ensemble (London), in which his large-scale instrumental trilogy Schilderkonst was given its premiere. Other recent major works include The Open Consort (for mixed ensembles based on 17th-century models), Stacking, Weaving, Building, Joining (for any number of players), Hototogisu (for children's choir and piano duo) and New Day (for solo piano and ensemble). While the main focus of his recent music has been on solo and small-ensemble works (many of them variously rethinking notions of ensemble playing and working with extreme distillations of musical materials), he has also produced a steady stream of choral and vocal ensemble works and music for solo voice. Of these, Sint Lumbi, commissioned by the Choir of Gonville and Caius College, Cambridge, was released on Signum Records in 2005; he has also completed three works for the professional forces of EXAUDI. Current commissions include Finchley Children's Music Group (for their 50th anniversary season in 2008), Uroboros Ensemble and the oboist Christopher Redgate. James' activities as a conductor are focused on contemporary repertoire, though he also specialises in early vocal music. In 2002 he founded the contemporary specialists EXAUDI Vocal Ensemble with the soprano Juliet Fraser. With them he maintains a busy international concert and broadcast schedule, and has released four acclaimed CDs on NMC, of Finnissy, Fox, Lutyens and Skempton. He was appointed Musical Director of the New London Chamber Choir in November 2007, having worked with them on Stravinsky's Les Noces for the Barbican's Michael Clark Dance Company Stravinsky Project.

He is also Musical Director of the Orlando Chamber Choir (London), and has worked as a guest conductor with Endymion, IXION, I Fagiolini, New Music Players and Birmingham Contemporary Music Group, with whom he has recorded Howard Skempton's Chamber Concerto for NMC. James is also active as an organ recitalist, pianist and writer on contemporary music, and broadcasts regularly on early and new music for BBC Radio 3. In December 2006 he gave the first-ever BMIC Cutting Edge organ recital in St John's, Smith Square, a programme of Fox, Finnissy and Feldman; also in 2006 he co-founded the ensemble Kürbis with the composer Claudia Molitor, dedicated to the performance of contemporary and experimental chamber music. The ensemble has performed in London, Cambridge (Kettle's Yard) and at Soundwaves Brighton, the latter a programme of Skempton, Cardew and Feldman, recorded for BBC Radio 3.

'I think of my work as writing-through-life: provisional conclusions at best, open-ended and experimental in spirit. Writing through the things I find around me, filtering them through my own preoccupations in dialogue with the world outside. I work mainly in lines, prefer multiplicity, polyphony and layering, but also (increasingly) plain-speaking and extreme distillation of content, the sort of clarity that contains within its apparent emptiness an apprehension of the fullness of the world. '

On The Open Consort 'Like a realisation of Satie's musique d'ameublement, just happening to happen...Enchanting.'

On Sint Lumbi 'An arresting application of the principles of the medieval Winchester Troper.'