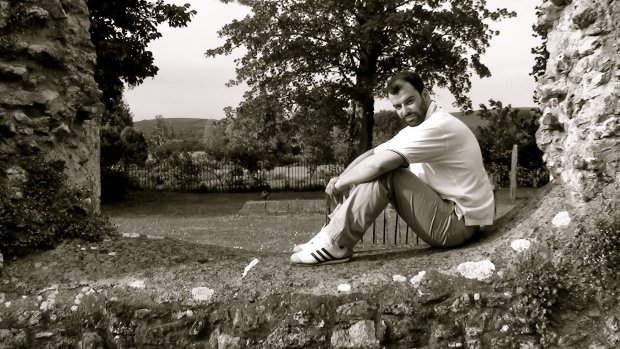 In the dark, a pianist begins to play. She continues, as though nothing is out of the ordinary, until unexpectedly a small table lamp lights up and she stops, apparently under its spell. The light goes off, and she starts to play again. This dialogue – music/dark; silence/light – continues with increasing agitation until finally the pianist takes control of the music and switches the lamp off for good.

(Tim Rutherford-Jones on DIY 1: the pianist and the lamp)

The music of Gregory Emfietzis is driven by a desire to increase the communicative potential of new music – without resorting to easy aesthetic compromises. In its exploration of the drama, psychology and ritualism of public performance it reaches far beyond sound alone to embrace staging, lighting, dramaturgy, costume design and more. Some works, such as the miniature opera Mirror, mirror on the wall: the crucial moment, seem written as much for actors as for musicians. Others, such as How to... corrupt someone, tend towards a more instrumental or sonic theatre.

Attempting to experiment with platforms beyond the limits of the typical musical performance, Gregory has extensively collaborated with artists in order to find common grounds between varying forms of art. In two of his previous projects, Music Impossible (a ‘magnified’ shadow theatre piece supported by the LSO and the Arts Council-England) and L'antigonie (a fusion of dance and music supported by the Arts Council-England), the story is partly narrated by musicians themselves as acoustic and visual puppets/actors/dancers.

Gregory Emfietzis was born in Thessaloniki, and took a degree in Music Science and Art at the University of Macedonia. He moved to the UK in 2004, to study composition with Christopher Fox at Huddersfield University, and with Fox, Richard Barrett and Jennifer Walshe at Brunel University.

His music has been performed by leading ensembles across Europe and North America. Notable performances include, the quintet Fear (not) premiered byensemble Wien-Berlin at the Wiener Konzerthaus, the opera The Darkness of Mistico staged at the Greek National Opera House, the solo cello The Dark Art of Obscurantism -a commission by the London Sinfonietta- performed by Olly Coates at the Southbank Centre, and Sisyphus Victimised for 9 musicians, conductor and video projection premiered by the London Symphony Orchestra (as part of his residency with the LSO). Other groups he has worked with include Apartment House (UK), Asamisimasa (Norway), Greek Contemporary Music Ensemble (Greece), London Contemporary Orchestra (UK), Orkest de Ereprijs (Netherlands) and the Quasars Ensemble (Slovakia).

In addition to the above, Emfietzis is Composer in Residence at the Youth Music Centre (London), and Artistic Director of the Metapraxis Ensemble.