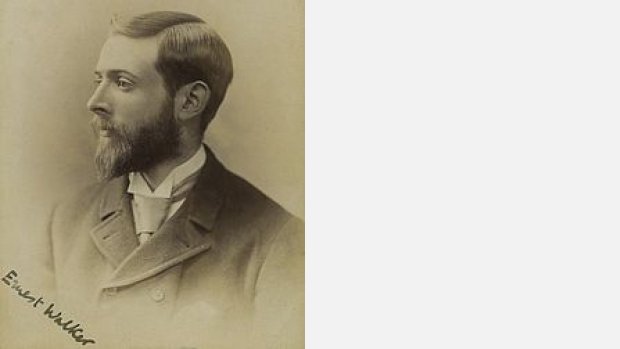 Born in Bombay on July 15, 1870; .Ernest Walker was an English teacher, writer on music, composer and pianist. His boyhood was marked by omnivorous self-instruction which was intensified when in 1887 he entered Balliol College, Oxford, and was befriended by its master, Benjamin Jowett. Taught by R.L. Nettleship, who profoundly influenced Walker's philosophical interests, and W.R. Hardie, he took the BA in classics (1891), after which followed the BMus (1893) and DMus (1898). In 1891 Balliol appointed him assistant organist to John Farmer, who had established there the series of Sunday concerts to whose fame and scope Walker signally contributed, particularly from 1901 when he succeeded Farmer as director of music. Walker’s concerts brought to Oxford such artists as Plunket Greene, Steuart Wilson, Fanny Davies and Adolf Busch, and helped to create the climate for the acceptance of music as a serious discipline, a process which culminated in 1944 with the establishment of an independent faculty of music. At the Balliol Concerts Walker gave the first performances in England of Brahms’s op.117 and of the Rhapsody op.119. He resigned the post of organist in 1913 and as director of music in 1925. He was made an honorary Fellow of Balliol in 1926.

Walker’s passion for integrity of craftsmanship and his aversion to theatricality show in his music. Outstanding in his word settings are the Five Songs from England’s Helicon and the solemn anthem Lord, Thou hast been our refuge. The Cello Sonata (1914) combines passion and harmonic adventure.