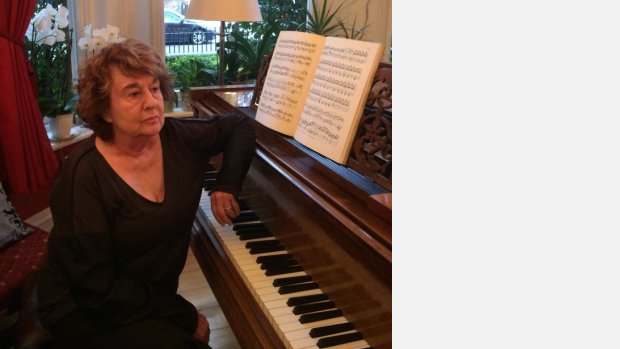 ERIKA FOX as born in 1936 in Vienna of Hungarian/Romanian parents. She won a scholarship to the Royal College of Music where she studied piano with Angus Morrison and composition with Bernard Stevens, Jeremy Dale Roberts and Harrison Birtwistle.

Erika has written prolifically for a wide variety of instrumental combinations. Her works have been performed at London’s South Bank Centre, at major festivals and have received broadcasts both in the U.K. and abroad.  Her work, Shir, for large ensemble was featured on Channel 4 Television.

Her interest in ritual and theatre is reflected in much of her music. Players are often called upon to step outside their conventional role, for example, to sing, speak, or move spatially.

Her musical language is a fusion of serial techniques, other non-tonal idioms, as well as melody sometimes based on East European folk traditions and Jewish liturgical chant.

Erika has taught music in schools, privately, at the Centre for Young Musicians, Pimlico, and for a number of years she ran Composition Workshops in the Junior Department of The Guildhall School Of Music And Drama. She spent a term coaching the orchestra at the Yehudi Menuhin School in her Litany for Strings, commissioned by the school, and performed at the Queen Elizabeth Hall, the Cheltenham Festival and broadcast in the series, “Youth Orchestras of the World.” Erika has also been Visiting Composer and Teacher at the University of Auckland, New Zealand.

An article about her music is published in ‘European Judaism’---volume 35, No.2 (Berghahn Books), in association with Leo Baeck College.

In 1983, Erika won the Finzi Award for her quartet Kaleidoscope and her puppet music drama The Bet (1990) was performed to great acclaim at the Purcell Room, the Almeida Theatre, the Huddersfield Festival and the Norwich Puppet Theatre, and was then taken on an extensive tour of schools. In the same year she was invited to be one of the composers to accompany John Cage to Paris and Strasbourg and take part in his ‘Europeras 1 and 2’ commissioned by the Almeida Festival.

Her chamber opera The Dancer Hotoke (1991) was nominated for an Olivier Award.