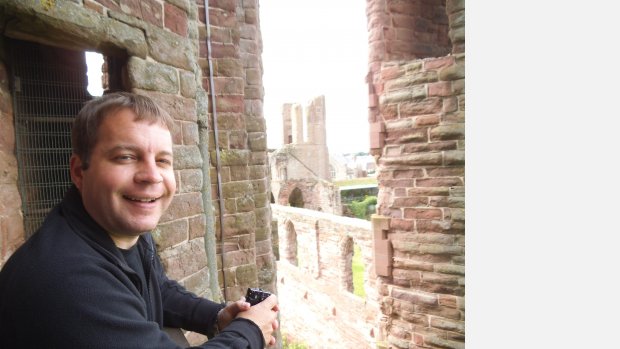 Rob Howard (born 1977) hails from Prescot, having attended Evelyn Primary, Prescot School, Knowsley Community College and the Junior Department of the Royal Northern College of Music. Free lessons on bassoon and violin (and later, piano) via Knowsley Performing Arts Service enabled Rob to perform with the Knowsley, Wirral and Merseyside Youth Orchestras throughout the 1990s. He joined Prescot Parish Church Choir aged 7, going on to become Head Chorister (and is now one of its leadership team). Rob turned down a place at St. John's College, Cambridge, to read Music at Birmingham University and Conservatoire (1995-98; during Simon Rattle's final three years with the CBSO), studying bassoon with Maria Mealey (Monte Carlo Opera) and conducting with Anthony Ridley (one-time Guest Conductor to the Berlin Philharmonic). Then followed a Composition MPhil and PhD at Goldsmiths College, London (1998-2003) with Philip Cashian, amongst others, whilst holding a part-time lecture post, and stewarding at the Royal Albert Hall (BBC Proms).

Rob then returned home to Merseyside, taking a PGCE in Secondary Music at Edge Hill University. From 2007-13 he was Director of Music at Deyes High School, Maghull; renowned for its extra-curricular music provision, performances of musicals, and music tours of London, New York, Paris and Rome. In 2008 the Deyes Gospel Voices reached the final of BBC TV's Last Choir Standing. In 2013 Rob was appointed to his current post as Assistant Head of Music Faculty at St. Edward's College, Liverpool, which is also the Choir School to Liverpool Metropolitan Cathedral. He has since led the school to a highly successful tour of Paris, performing in Messiaen's La Trinite and Faure's La Madeline. Rob conducts three orchestras at St. Edward's; a Junior Orchestra of 70, a Senior Orchestra of 50 and a sixth-form Chamber Orchestra enrichment option. He also teaches music at Runnymede St Edward's Primary School where he additionally directs the school orchestra.

Rob has composed since childhood, receiving commissions from soloists, music services, and from Contemporary Music Making for Amateurs (COMA) who regularly programme his music with their regional groups across Britain. His orchestral work 'The Island' (1999) was originally conducted by Marin Alsop (protege of Leonard Bernstein and conductor of the BBC Last Night of the Proms in 2013 and 2015) with the City of London Sinfonia and later performed at the 2003 Bath International Festival by the Royal Northern Sinfonia. In 2007 Rob's four movement Festival Suite was commissioned and performed by Knowsley Performing Arts. In 2011 American professional bassoonist Henry Skolnick performed Rob's 'La Reproduction Interdite' on his USA recital tour.

Rob now regularly conducts, composes and arranges for schools and amateur orchestras, and especially for the annual 10-day Prescot Festival of Music & the Arts which he founded in 2005 (www.prescotfestival.co.uk). The Festival was part of Liverpool's Capital of Culture schedule in 2008 and Rob completed a Choral Evensong setting for the 2011 Festival. Most recently, Rob has composed 'Flautando' for flautist Laura Bonnett, 'Meditation' for organ for Tim Hall and Ian Tracey, 'Reclining Figure' for himself at the piano, the carol 'A Babe Is Born' for David Kernick, 'Ave Verum Corpus' and 'Jubilate Deo' for Prescot Parish Church Choir and 'Cortege' for the South Liverpool Orchestra based at Liverpool Hope University, which he conducts, as well as the Phoenix Concert Orchestra. For full information, composition recordings and future performances see www.roberthowardmusic.co.uk.

Prescot Festival of Music & the Arts