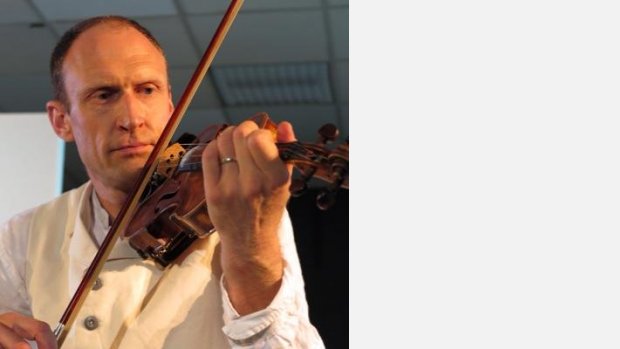 Derek Nisbet is a Composer, Musician, Sound Designer & Film-maker who specialises in creating music for unusual situations. Work includes music for cathedral organ to preface a tightrope walk by Ramon Kelvink (Tightrope Prelude), for a theatre show in an underground car-park (Wanderlust), for a brass band and choir in a livestock mart in Ireland (The Last Lot) and for a show to mark the decommissioning of a hospital (Three Doctors).

Derek is Co-Artistic Director of acclaimed theatre experimentalists Talking Birds – he has created scores and sound designs for over 50 theatre productions – which include Troy Story, an opera commissioned by Orchestra of the Swan, performed at Town Hall, Birmingham by a cast and orchestra nearly 200 strong, including 164 young people from Primary & Special Educational Needs schools. It was a finalist in the Best Musical Initiative category in the 2014 Music Teacher Awards.

With writer/director Peter Cann working with primary school pupils in Coventry he created Twin Song for the Volgograd Children’s Symphony Orchestra, premiered at Coventry Cathedral with the Coventry Youth Wind Orchestra, and given its Russian premiere in November 2014.

His work with some of the leading artists and companies of the day including Claire Cunningham (Guide Gods), Ockham’s Razor (Arc and The Mill), Untied Artists (Intimate History) and Theatre Absolute (Powder, Far From The Sea) has been performed at the Queen Elizabeth Hall, the National Theatre, the Royal Opera House, the Lillian Bayliss Theatre at Sadler’s Wells and at venues in Moscow, Vancouver and Sweden. His music has been heard on BBC Radio 3 (Late Junction) and BBC Radio 4 (The Balloonists, Dr Pfeffer’s Lonely Hearts Club and Messages to a Submariner).