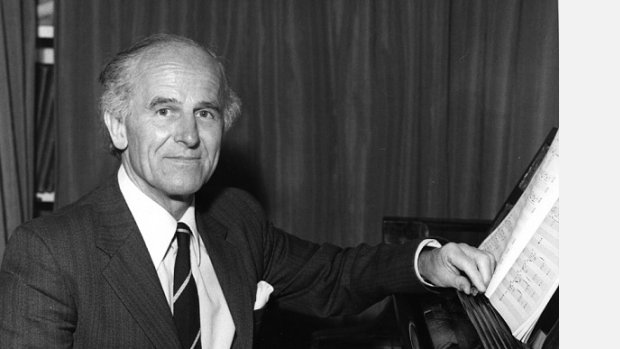 Sir David Willcocks CBE, MC, was born in Cornwall on 30th December 1919 and was a British choral conductor, organist, and composer. He had an illustrious career, and since 1958 was published by Oxford University Press, with which he enjoyed a long, happy, and fruitful association.

He trained as a chorister at Westminster Abbey before becoming a music scholar at Clifton College, Bristol, after which he was appointed the organ scholar at King's College, Cambridge. When the Second World War broke out, he interrupted his studies to serve in the British Army, eventually being awarded the Military Cross. He returned to Cambridge in 1945, completing his studies, and in 1947 was elected a Fellow of King's College and appointed conductor of the Cambridge Philharmonic Society. Subsequent appointments included posts at Salisbury Cathedral and the Salisbury Musical Society, Worcester Cathedral (from where he also directed the Three Choirs Festival in the years 1951, 1954, and 1957), the City of Birmingham Choir, and the Bradford Festival Choral Society.

In 1957 Sir David became the Director of Music at King's College, Cambridge, additionally serving as the university's organist, conductor of the Cambridge University Musical Society, and as a lecturer. Under his direction, the college choir made numerous recordings and toured worldwide, and in 1960, Sir David also became musical director of the Bach Choir in London. That same year, Oxford University Press appointed him joint editor, along with Reginald Jacques, his predecessor at the Bach Choir, of the first, and hugely popular Carols for Choirs volume; Sir David then co-edited the second, third and fourth volumes of the series with John Rutter. The Carols for Choirs series, including 100 Carols for Choirs, has ensured that choral singing is now an integral part of the celebrating of Christmas. He also became General Editor of OUP's Oxford Anthems series, and throughout his life has composed and arranged a great many choral works, a large number of which have since entered the standard repertoire, thanks to his finely tuned musical instincts.

Famous for his energy, and for exercising complete and decisive control over all aspects of his recordings, he never lost sight of the fact that he was working with music and with people.

Sir David’s connection with renowned composers such as Britten and Vaughan Williams, his stature as a choir director, and his development of the Choir of King’s College, were an inspiration to professional and amateur choirs everywhere; the name of Sir David Willcocks is synonymous with English choral repertoire.

In the 1971 Queen's Birthday Honours, Sir David was appointed a Commander of the Order of the British Empire, and in 1974 took up the post of Director of the Royal College of Music. He was created a Knight Bachelor in 1977 in the Queen's Silver Jubilee Honours, and held more than fifty honorary degrees from around the world. Sir David was Music Director Emeritus of King's College Choir, and an Honorary Fellow of King's College, Cambridge. Sir David died in September 2015.

A Life in Music: Conversations with Sir David Willcocks and Friends, edited by William Owen, is published by Oxford University Press.