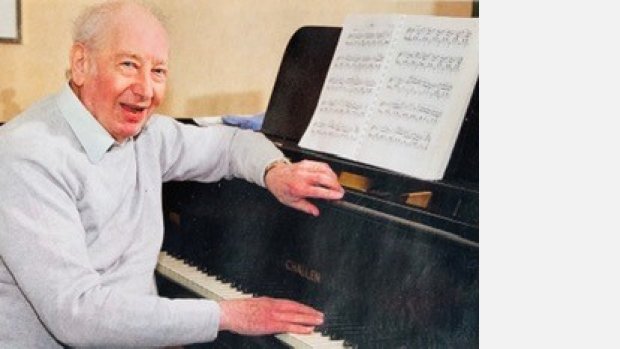 David Ellis, born in Liverpool in 1933, was a pupil at the Liverpool Institute before continuing his studies at the Royal Manchester College of Music from 1953-1957, a significant period in British contemporary music - among his fellow students were Peter Maxwell Davies, Harrison Birtwistle, Elgar Howarth, Alexander Goehr and John Ogdon, who together formed the ground-breaking New Music Manchester Group. It was at this time that his compositions gained recognition, not only through performances, but also in the form of commissions and awards: the Royal Philharmonic Prize, the Royal College of Music Patrons' Award, the Theodore Holland Award, the Royal Manchester Institution Silver Medal, the Ricordi Prize and a Gulbenkian Award.

From 1964 he worked at the BBC as a Music Producer, initially having the responsibility for programme planning and administration of the BBC Philharmonic, and subsequently also for the development of the orchestra's international profile. In 1977 he became Head of Music, BBC North, leaving in 1986 when he was appointed Artistic Director and Composer-in-Residence to the Northern Chamber Orchestra. In 1994 he moved to Portugal working with the newly-established Orquestra Sinfonica Portuguesa in Lisbon as Assistant to the Director of Music and Chief Conductor, Alvaro Cassuto.

He returned to the UK to devote himself exclusively to composition with time set aside for CD production work in a variety of interesting repertoire, both classical and contemporary - the result of his association initially with Naxos and ASC Records, and later with several important independent international labels. Apart from performances by many organisations in the U.K., his music has been played and broadcast with considerable success in Canada, the U.S.A., Israel, Portugal, Denmark, Brazil, Australia, China, and throughout Europe in more recent years.

A new orchestral work "Desinent" has been completed, together with some shorter pieces - "Four Journeys and an Arrival" (for double bass and piano), Concerto Corto e Dolce (for recorder, viola and harp), "Distant Dreams - Forgotten Memories" (for violin and double bass), and "Parallel Shadows" (for double bass and piano), continuing his fruitful association with Recital Music. Several of his scores have been recorded commercially in recent months, including the "Vale Royal Suite" for strings, and "Autumn Light" a newly-commissioned choral work for Alteri and David Jones, plus the Sonata for solo violin (1955) and the Sonata for violin & piano [composed for Wu Zheng-Yu]. The Evelyn Barbirolli Memorial Concert on 6 June 2009 at the Bridgewater Hall, Manchester, included the recently-commissioned Arioso Aperto ("The Open Air") - words by Richard Jeffries. Written for James Bowman, with ensemble accompaniment, this project has been generously supported by the RVW Trust. Leon Bosch and Alison Rhind gave the premiere of "Parallel Shadows" for double bass and piano on 14 March 2009 at the Riverhouse Arts Centre, Walton-on-Thames, UK. It was repeated in the USA during June 2009 and performed again at the Lake District Summer Music Festival on 5 August 2009.