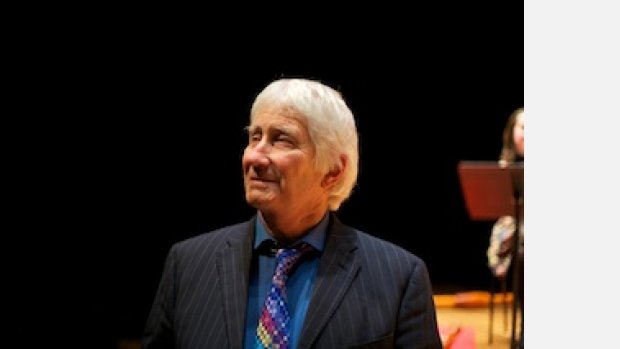 David Bedford was born in London in 1937 in to a musical family. His grandmother was the composer  Liza Lehmann, and his mother, Lesley Duff, was a member of the English Opera Group just after the Second World War, and took part in several Britten premières. He began composing at the age of seven and after attending Lancing College, where he studied with John Alston and Christopher Headington, went on to study at the Royal Academy of Music with Lennox Berkeley. A grant awarded by the RAM in 1961 enabled him to study with composer Luigi Nono in Venice.

In the late 1960s he played keyboards with Kevin Ayers’ cult band ‘The Whole World’, which led to numerous collaborations with musicians from the rock world, most notably in arrangements for Mike Oldfield (‘The Orchestral Tubular Bells’), Madness (‘Our House’), Elvis Costello, Frankie goes to Hollywood, Enya, Billy Bragg and many more.

He also orchestrated the films ‘The Killing Fields’, ‘Supergrass’, ‘Absolute Beginners’, ‘Meeting Venus’, ‘Orlando’, and was Choral Coordinator for ‘The Mission’. He  wrote original music for several of the Hammer House of Mystery and Suspense TV series.

Another aspect of Bedford’s work was composing for educational purposes.

In the early 1960s he was one of the first composers to go into schools and do creative work with pupils. He was appointed Youth Music Director of the English Sinfonia in 1986, and Composer in Association in 1994. His music in this genre ranged from small pieces for pupils with little or no musical knowledge, to 7 school operas. His innovative approach  led to such works as ‘Seascapes’ (1986) and ‘Frameworks’ (1989), in which students were encouraged to create their own music in the context of a public concert with a professional orchestra - these two pieces have so far involved over 4000 students. His largest major educational piece until recently was ‘Stories from the Dreamtime’, (1991) for 40 hearing impaired children and symphony orchestra. From 1996 to 1999, he was Creative Projects Director for the Norfolk and Norwich Festival. 'The Wreck of the Titanic' written in 2009, became  David's largest education piece and involves youth orchestra, wider opportunities beginners, youth chorus, children’s chorus and professional ensemble.

David lived in Bristol with his wife and three of his seven children. He died in October 2011.