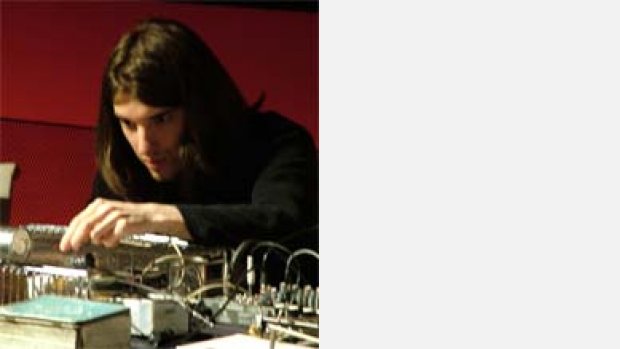 Dan Wilson is an instrument builder, composer, hardware hacker and sometime writer specialising in mediadropping (the unsolicited placement of recordings in public spaces) and anti-tainment (discordance – usually proliferated via mediadropping). He is also known to operate under the monikers Ashfordaisyak and Meadow House when mediadropping, and his album 'Tongue Under a Ton of Nine Volters', released on Alcohol Records in 2006, is a compilation of mediadropped material.  His long-running Resonance FM radio serials 'The Hellebore Shew' and 'Epistaxis Time' showcased his mediadropping activities. One of Wilson's major electroacoustic pieces is 'Corrosion Suite' which features sounds fed to relay coils thereby creating electromagnetic fields that induce any metal object placed nearby to resonate. The piece was composed and recorded for the European Radio Symposium in 2005, and later an expanded version – made possible through the Arts Foundation's awarding of its electroacoustic music fellowship upon him – was performed at the Tate Modern in 2007 with improv group Oscillatorial Binnage. Wilson's research into touch contact instruments and electromagnetism led him to develop ideas on what he calls 'miraculous agitations' which are unusual harmonically rich vibrations occurring when combinations of objects (salvaged from industrial sites) interact together physically and sympathetically during electromagnetic resonation.