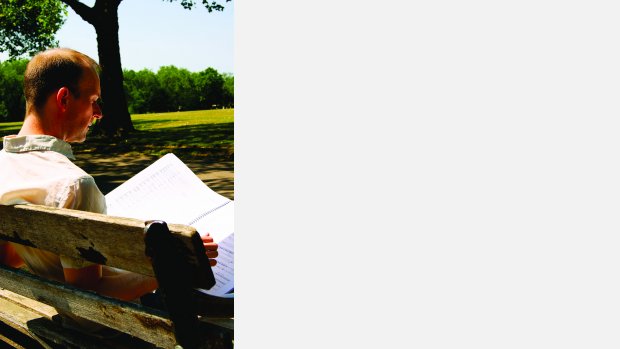 Brian Inglis' music has been described as extraordinary, powerful,  moving and passionate. His output ranges from chamber and choral music to orchestral and operatic works, also taking in multimedia and pop. He has specialised in writing for voice, and has a particular interest in (especially unaccompanied) instrumental and vocal solos. Alongside  virtuoso showpieces like Sailing to Byzantium for recorder and Ecstasis for voice, he is equally at home writing for amateur choirs (Without Loss, Verbum bonum et suave, After-Thought). His music combines experimental elements with eclectic historical, geographical and genre influences - from Japanese music to synthpop. Enduring threads which weave through his music are polystylism and postmodernism (typified by 1993's Recorder Concerto but equally evident in the 2017 Piano Trio), an interest in mystical texts and themes, and the interplay of process and intuition, movement and stasis.

Of Irish and Scottish heritage, Brian was born and partly brought up in Germany. He studied music at the University of Durham and composition at City University, London - an MA was awarded in 1993 (along with the Worshipful Company of Cordwainers' Prize), and a PhD (supported by a British Academy major scholarship) in 1999. His principal teachers were John Casken, Roger Redgate, Simon Holt and Rhian Samuel. Outside formal study, he has participated in the Dartington International Summer School; Aberystwyth's Musicfest, and the Dundaga Workshop (Latvia).

Having taught at Trinity Laban and the RCM, Brian is now Senior Lecturer and BA Music Programme Leader at Middlesex University. Also a musicologist, he researches broadly in the areas of genre and identity.

[Biography adapted from the composer's publisher]