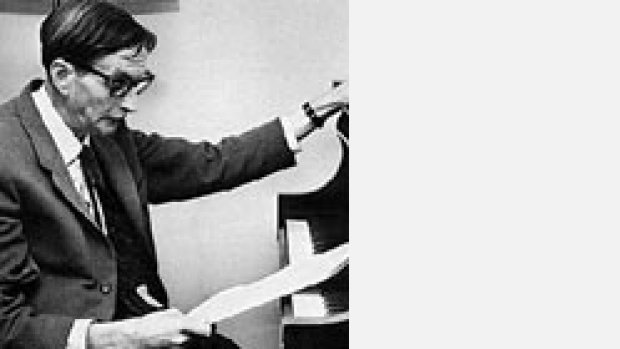 BERNARD (JAMES) NAYLOR, composer, conductor and organist, was born in Cambridge, England November 22, 1907, and died in Bassenthwaite, Cumbria, England May 19 or 20, 1986. His formal music training began in 1924, studying composition under Vaughan Williams, Holst and Ireland. While an organ scholar at Oxford (1927-1931), Naylor conducted the Oxford University Opera Club prior to moving to Canada in 1932. From 1932 to 1959, Naylor resided alternately in England and Canada, obtaining different positions in each country.

During his first residence in Canada (1932-1935), Naylor conducted the Winnipeg Male Voice Choir, Winnipeg Philharmonic Choir and Winnipeg Symphony Orchestra, while organist and choirmaster at Holy Trinity Anglican Church. From 1936-1939, Naylor was organist and musical director at Queen's College in Oxford. He returned to Canada in 1940, founded and conducted the Little Symphony of Montréal (1942-1947), but moved back to England between 1950-1959 where he had accepted positions as instructor at both Oxford University and Reading University. Naylor became a permanent resident of Canada in 1959, first in Winnipeg and later in Victoria, concentrating entirely on composition.

Naylor's compositions are mainly vocal, although instrumental works for voice with piano, orchestral or chamber ensemble intitated his output. While the solo voice has received the most attention in his compositions, Naylor has also composed many works with chorus. The choral works profile Naylor's personally evolved harmonic and contrapuntal idioms, using an emotional and imaginative range, and make a significant contribution to contemporary choral repertoire. Naylor wrote large, heavily scored orchestral choral works in his early years, which evolved into an intensely passionate style of writing found in the Three (Latin) Motets and Nine (English) Motets. He used mostly liturgical texts, with a few secular settings, such as the four-part Herrick-Suite comprised of four poems from the "Hesperides" collection by Robert Herrick, and his later work Personal Landscape (1971), a song cycle to poems by Canadian poet P.K. Page.

Image and biography from the Canadian Music Centre