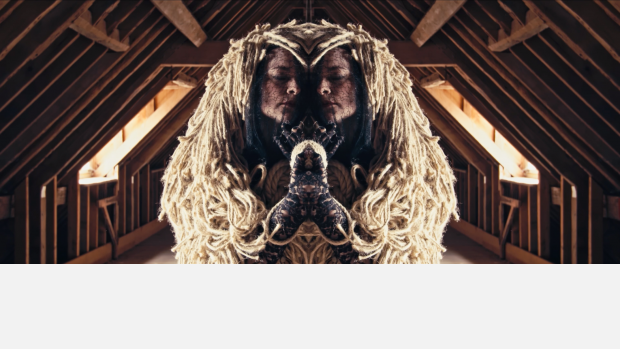 Anna Braithwaite's work is distinctly theatrical in nature, thought-provoking, humorous and unexpected. She studied composition at Goldsmith's University with Jeremy Peyton-Jones, where she began to experiment with the use of verbatim text in her music. Her primary motivation is to write pieces that connect directly and viscerally with both performer and audience. One of the ways her work does this is by the use of verbatim text, taken from interviews or workshops, which lends both an unvarnished honesty and a vernacular language that can move and entertain in equal measure. She explores the social currents and dynamics that interest her via the interplay between soloist and ensemble, or audience and performer. Her many years of experience as a cabaret artist have honed her techniques for dismantling the ‘fourth wall’ that is said to exist between musicians and those listening. She aims to confound peoples’ expectations of contemporary classical music and play with their preconceptions by challenging traditional structure, delivery and presentation.

Anna is well known for her work with community choirs, she collaborates with the performers using their words, research and musical ideas to create a piece of music which is unique and personal. Her piece for Doncaster's Quirky Choir called 'Look Up Doncaster' was broadcast on BBC Radio 3 (video recording of work below). During the pandemic Anna has been co-writing a collection of songs with and for performance by members of Touchbase Care called 'The People's Report'. This work will be premiered at the Cheriton Light Festival 2022.

In summer 2020 Fat Lady Opera commissioned Anna to co-write an opera about isolation called ‘Persephone’s Dream’ with a libretto by writer/director Tania Holland Williams. Working on Zoom they created a thirty minute opera for live cellist, singer and (live-streamed Zoom) chorus which was performed at the Cockpit Theatre, London in September 2020 as part of the Tête à Tête: The Opera Festival.

Other commissions include: 'Somnambulist' (2020) and MOONSEED (2021) for Electric Medway festival, 'Brainsong'  (2020) for South by South East festival, soundtrack for film 'Fortopia' by Matt Rowe (2020), 'Washing Machine Head' (2019) for Sacconi Festival, ‘Fait Accompli’ (2016) and 'The Wooden Knight' (2017) for Profound Sound festival and ‘Fanfare For A Seaside Town’ (2017) an innovative 'gig lecture' created and performed with Prof. S. Labadi of University of Kent for the Folkestone Triennial.

In 2019 Anna conducted a six month residency at Chatham Historic Dockyard for which she created two films in collaboration with artist Matt Rowe. [http://www.annabraithwaite.co.uk/subhuman]

She is a founder of the Montrose Composers' Club [http://montrosecomposersclub.com] and co-leads the Free Range Orchestra (Kent based collective of improvising performers).

Anna specialises in the performance of new music, she has performed in premieres of new compositions by Emily Peasgood, Nicola Burnett Smith and Rebecca Askew and has performed her own music all over the U.K. She has worked as a cabaret artist since 2000 and has created and performed in three sell-out shows at the Edinburgh Festival Fringe with her partner Tanya Holt. They have enjoyed working all over the world from Sydney to Cirencester, Berlin to Bangor.

Image above by Matt Rowe of Anna Braithwaite taken from their collaborative film 'Rope Cycle'. 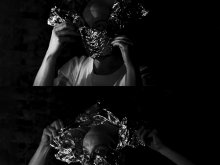