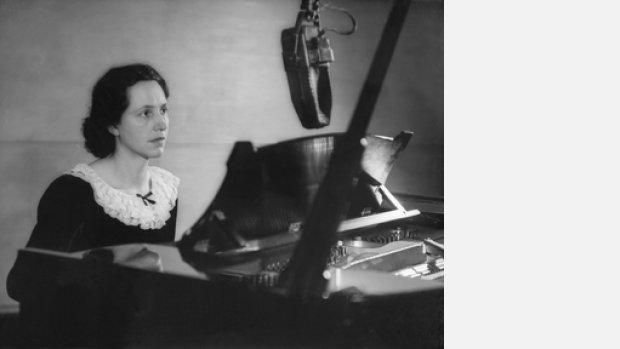 Ann Driver was a household name in the 1940s and 50s because of her regular broadcasts for children on the BBC Schools Radio service.  Music and Movement, as the programmes were called, had grown out of Ann’s training at the London School of Dance and Eurythmics, where she was a star pupil of its legendary founder, Emile Jacques-Dalcroze. Born in Vienna of Swiss parentage, Dalcroze had studied music with, among others, Anton Bruckner, Léo Delibes and Gabriel Fauré. He created a system of eurythmics with wide-ranging applications and benefits for all age groups, aiming to provide the student with a solid rhythmic foundation through movement in order to enhance musical expression and understanding.

In the 1930s Ann Driver was working with very overcrowded classes of schoolchildren in Deptford, and was surprised to be approached by the BBC to teach ‘Music and Movement’ on the radio. The programmes were broadcast one or twice weekly in term time, and were much used in primary education of that day.  I must be one of many children of the 50s who can remember the fun of morning periods spent in the school gym, with music on the wireless and an unknown, unseen lady encouraging us to move around or dance or just lie on the floor!

Music and Movement classes were also held from 1949 in the drawing room of York House, St James’s Palace, with a collection of 5 – 11 year olds.  Included in the group were the two sons of the then Duke of Gloucester, whose governess was Ann Driver’s collaborator, Rosalind Ramirez, and together they wrote a book about these early days, Something Particular (published by Hodder and Stoughton in 1955), with beautiful illustrations by John and Isabel Morton-Sale.

Ann Driver was a born teacher as well as an outstanding musician, lecturer and improviser. She was a person of great warmth and imagination, concerned with the needs of her pupils, thinking always of how they could best express and develop themselves.  Here is a passage she wrote for the book Something Particular, to open the chapter entitled Music:

“Music is a magical power. Lovely sound is woven from the loom of melody, harmony and rhythm.  In it we feel time, space and energy.  On its wings we travel through worlds undreamed of that we dimly trace. Through its message of wordless purity we hear a divine language – a language of beautiful tones.  My desire was to lead children into this Paradise.”