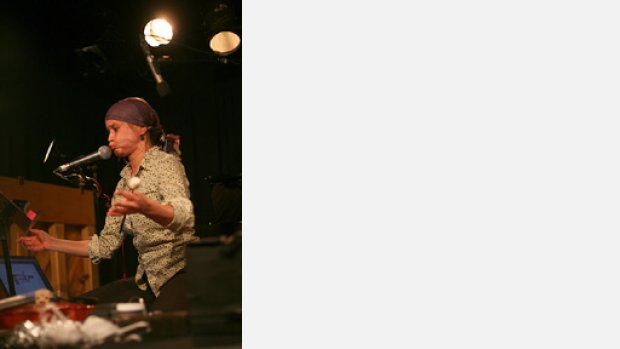 Alwynne Pritchard was born in Glasgow in 1968 and as a teenager began having composition lessons with her father, Gwyn Pritchard. She then studied with Robert Saxton at the Guildhall School of Music, and later with Melanie Daiken, Justin Connolly and Michael Finnissy at the Royal Academy of Music, where she was awarded many prizes for her work. In 1997 she was awarded a research scholarship by the University of Bristol and in 2003 received a PhD in composition. In the summer of 2000, Alwynne was awarded a Visions of Norway scholarship for a two-month artist's residency at the Kulturhuset, Bergen and later returned for an extended residency three years later. In April 2007 she completed a one-year residency at the Internationales Künstlerhaus Villa Concordia in Bamberg, Bavaria and is currently living in BerlinAlwynne's music has been described by critics variously as "intriguing", "thought provoking" and "cool and lucid" and has been performed by leading players and ensembles throughout Europe and in America, as well as being recorded for CD and regularly broadcast on the BBC and abroad. In 2002 the BBC Symphony Orchestra gave the first performance Critical Mass and in March 2007, her piano concerto Map of the Moon, was premiered by Nicolas Hodges and the BBC Scottish Symphony Orchestra. Decoy, created at the Heinrich Strobel Stiftung in 2005 for the Donaueschingen Musiktage, was awarded the special prize given by the Foundation Ton Bruynèl, STEIM and the Foundation GAUDEAMUS. New projects include Frame for the Danish group Athelas for ensemble, live electronics, tape and film as part of the European Integra project; Don't touch me, you don't know where I've been, a music theatre/flute concerto for her own voice, Norwegian flautist Børnar Habbestad, asimisimasa ensemble and live electronics, developed by Thorolf Thuestad at BEK in Bergen; and a work for electric guitar and two computers for Luc Houtkamp's POW ensemble in Amsterdam.In 2005 Alwynne formed the Bergen/London-based improvisation quintet FAT BATTERY and a year later the trio Myrtle, with computer programmer Thorolf Thuestad and flautist Rowland Sutherland came into being. Her most recent performance project is the duo Ding Dong with German improviser and hardware circuit bender Guido Henneböhl.Alwynne Pritchard teaches composition at Trinity College of Music in London and works as a freelance presenter for BBC Radio 3.

'Alwynne Pritchard is a composer with a rare ability to stand outside the confines of her chosen medium, harnessing her particular art form to explore and respond to a wealth of cultural issues. Her work offers constantly shifting perspectives on music and art through an ongoing re-evaluation of the composition process itself. The kaleidoscopic range of structures, techniques and media in Alwynne's work seem to me to be a series of constantly shifting waves over a broad and powerful undercurrent which is characterised by her clear and lucid approach to musical material as well as her direct and vibrant engagement in life, art and music.'
Mikel Toms

'A composer of originality'
John Allison, The Times