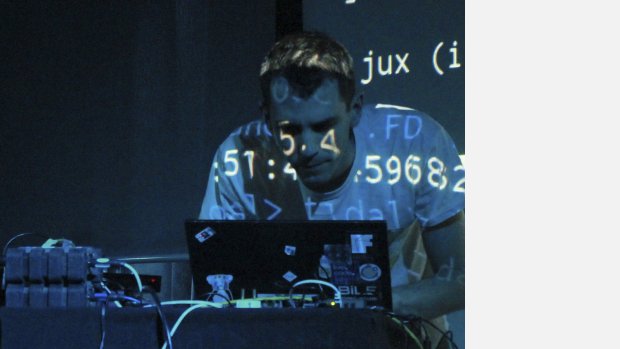 Alex McLean makes live techno with his handmade programming language TidalCycles, using a technique called "Live Coding". He has been performing with such algorithmic music since the year 2000, co-founding Algorave in 2011, an algorithmic dance music movement which has already spread to over ten countries.

His performances are in general fully improvised, rather than based on tracks. However recently he has started producing, leading to the six track Peak Cut EP on Sheffield label Computer Club [http://computerclub.bandcamp.com]. Peak Cut is available on a limited edition USB key which contains an operating system with Yaxu's software installed, complete with the source code for the EP tracks. Bleep.com described it as ".. Yaxu’s polyrhythmic and hyperreal strand of techno is showcased on cuts like Public Life and Cyclic showing that he is not just testing the confines of how music can be consumed but also how genres can sound. A truly forward-thinking influx of material from Yaxu and the Computer Club team".

Alex is Sound Artist in Residence at the Open Data Institute during 2016, exploring using live coding as a form of digital ethnography. He is also working on his first solo album Spicule, through a crowdfund on PledgeMusic supported by Sound and Music. Backers will be able to take part in live streams of the making of the album, as Alex develops algorithms that explore the interference patterns which form his polyrhythmic, hyperreal brand of broken techno. The album will be available on a new hardware format based on the Rasperry Pi and developed in collaboration with Pimoroni.