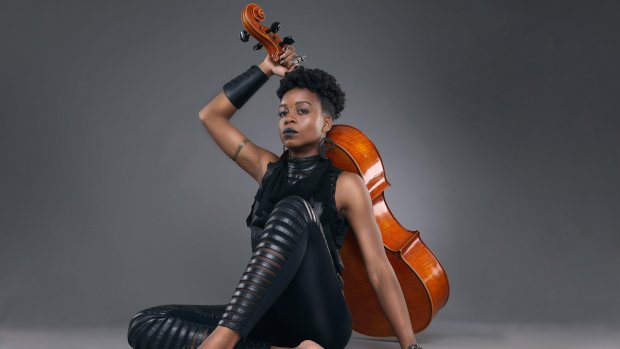 In the third of Alex Ho's curated series on transnational identity in new music, we hear from composer Ayanna Witter-Johnson.

In 2018 I was commissioned by the Ligeti Quartet to compose my first official string quartet which I titled ‘Mento Mood’.  As a cellist, I believe that a string quartet is  like a close knit family, a touching conversation and an opportunity to explore a deeper connection between kindred souls.  So in the spirit of community, I was reminded of the music that my paternal great-grandfather Jo made in the hills of Jamaica.  He was a mento box player in a mento band. Mento is a style of Jamaican folk music that predates and greatly influenced ska and reggae music. It typically features acoustic instruments, such as acoustic guitar, banjo, hand drums, and the rhumba box (mentobox) which is a large mbira in the shape of a box that can be sat on while played. Inspired by his legacy, I wanted to create a piece of music that would evoke that sense of togetherness between the players.  Like a soothing  balm for the soul in what feels to me to be troubling times for the African diaspora community in the UK & US at present, where many of my family members now live.

My Grandparents arrived in the UK in the late 1950s as part of the Windrush generation and my parents and I were all born in London.  My parents nourished the musical seeds that were sown early in my life and I embraced a diet of classical piano and cello studies alongside absorbing pop culture, soul, jazz, reggae, hip-hop and RnB music throughout childhood.  Eventually studying Classical Composition for both Bachelor’s and Masters at Trinity Laban Conservatoire of Music and Dance and the Manhattan School of Music (MSM).

Travelling to NYC to study at MSM, I brought with me a song I had written in my last year at Trinity Laban via a project with young Caribbean children after school called ‘Ain’t I A Woman?’  The project was about the life of Sojourner Truth, a former slave who earned her freedom and advocated for the rights of the disadvantaged for the rest of her life.  It was based on a speech she gave in 1851 in Ohio at the Women’s Convention and was the first piece of music I had written that explicitly drew upon my interest in that part of my ancestral history - the Transatlantic Slave Trade.  I performed the song at ‘Amateur Night Live’ at the legendary Apollo Theater in Harlem and became the only non-American to win the competition.  Word caught wind and I ended up meeting David Harrington of the Kronos Quartet who invited me to arrange a version of the song for myself and string quartet to be performed at Wilton’s Music Hall in London the following year.

Hill and Gully Records · Ain't I A Woman?

It was at that concert that I met the Ligeti Quartet with whom I became good friends and later becoming a collaborator. And so the seeds of my transnational identity as a composer were born.  Reflecting upon the journey of how the 'Mento Mood' commission came to be, it was truly a full circle moment. A celebration of the strength, triumph and joyful essence of my heritage - British, Jamaican and honorary New-Yorker,- and the first time that I had explicitly drawn upon my heritage as inspiration as a contemporary classical context as a composer. This was an internal and conscious shift to own that musical language. The beginning of navigating transnational identity within my music as a contemporary composer.

In other areas of my work as a performer, singer & songwriter, I have found it easier to embrace my numerous cultures: British, Jamaican, Londoner etc. due to the stylistic leanings, lyrics and the ability to easily reference the cultural music, reggae etc. for example, the title track from my debut album ‘Road Runner’. And now it feels imperative that all my music reflects my various cultures in some way.

Sunday 7th June 2020 would have been the premiere of my first major orchestral commission from the London Symphony Orchestra, in Trafalgar Square for their annual BMW Classics Series titled ‘FAIYA!’.  However it has been postponed due to COVID-19.  The privilege of the opportunity and weight of the commission really forced me to dig deep with regards to what I wanted to share with an audience of 2000+.  So again I returned to the wellspring of my heritage, as the piece draws upon traditional Jamaican Nyabinghi rhythms as well as more modern Danchall rhythms to drive the music and I look forward to hearing the piece come to live post the current pandemic.

Graduating with a first from both Trinity Laban Conservatoire of Music and Dance and the Manhattan School of Music, Ayanna was a participant in the London Symphony Orchestra’s Panufnik Young Composers Scheme and become an Emerging Artist in Residence at London’s Southbank Centre. She was a featured artist with Courtney Pine’s Afropeans: Jazz Warriors and became the only non-American to win Amateur Night Live at the legendary Apollo Theatre in Harlem, NYC.

As a composer, she has scored original music for various productions and as an arranger and orchestrator Ayanna has worked with the London Symphony Orchestra, Hugh Masekela, Ligeti Quartet, Kronos Quartet, The Hip Hop Shakespeare Company and the BBC Symphony Orchestra (Urban Classic). Since releasing her EP’s (‘Truthfully’, ‘Black Panther’ & ‘Ella, Reuben & Ay’) and her debut album ‘Road Runner’, Ayanna has extensively toured the UK and several countries in Europe, whilst gaining a MOBO award nomination and getting airplay on BBC Radio 1 & BBC 1Xtra. A performer of extraordinary versatility her live shows are intimate journeys that chronicle her experience as a female artist in the 21st century.

Because of her musical prowess, mesmerising vocals, non-compromising lyrics and ability to deftly reinterpret songs on the cello Ayanna is able to straddle both the classical and urban worlds effortlessly.

She is the definition of eclectic soul.