Stephen Hiscock, musician, on Graham Fitkin's 'Hook' (1992)
"We loved his style and felt his jaggedly rhythmic music would fit perfectly with what we were trying to do with ensemblebash" 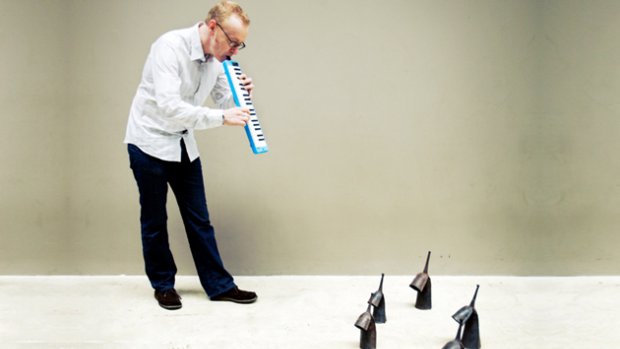 Hook was commissioned by my group, ensemblebash, for our inaugural gig at the Purcell Room on London's South Bank in January 1992. A couple of us in the quartet (myself and Richard Benjafield) had been at college in Manchester and had become aware of Fitkin’s work through the short lived 'classical' division of Factory Records. We'd also subsequently both performed on a tour of `Drum’, his piece about the Spanish civil war. We loved his style and felt his jaggedly rhythmic music would fit perfectly with what we were trying to do with ensemblebash.

Initially, without thinking through the practicalities, we naively gave Graham a list of all the instruments we owned between us - this numbered in the hundreds! Consequently, we were nonplussed at first to find Graham had written for four marimbas plus a few rototoms and pedal bass drums. Gradually though, the homogenous sound made perfect sense. This was typical Fitkin music - clean, lean, muscular and driving.

At the opening, after four bars of loud, brutalist drumming, the four marimba players play a long complex rhythmical figure in unison. This is visually exciting as well - four pairs of arms moving in exactly the same way. From then on, 'Hook' is driven along by rototom semiquavers, pedal bass drum and a bubbling bassline.

The drumming is a firm anchor for the piece. It's very 'four on the floor' (as drummers like to say) - a strong, pumping crotchet beat. Graham was heavily into House music at the time - especially from Chicago - and the rhythmic feel of this kind of music bled very obviously into 'Hook'.

Hook differs from its electronic influences though by having little moments of humour. Dotted throughout the piece are pockets of complete silence - almost like those joke empty bars in a Haydn symphony - and the sudden introduction of a solo splash cymbal on the 'comedy beat' (i.e. fourth) is rather unexpected. Stretches of the music are written like computer sequenced keyboard parts but then broken up by a surprise bar or two - before the players can resume their angular riffing. Occasionally, there is an unexpected lurching key change which hangs around for a while before the music returns to where it came from.

Hook ends with the same material as the beginning. This time though it has the addition of thumping pedal bass drums and the clattering rototoms, tightening the piece even more. The splash cymbal also lunges and spits on unexpected semiquavers. It ends suddenly - as if it's a machine that's suddenly had its plug pulled out of the wall.

Hook seemed like a new kind of percussion piece then. This was perfect for ensemblebash as we rather despaired of the percussion repertoire that was around in the early '90's. It's still an amazing piece and we still play it now. It never fails to get a gasp from the audience in the juddering silence that meets the finish - as if they've dared not breathe in the face of such a musical attack.

Stephen Hiscock studied Drama at Manchester before becoming a musician. He is a founder member of one of the world's most innovative chamber groups, Grammy nominated 'ensemblebash', working with musicians such as Stewart Copeland, Steve Reich, Nitin Sawhney, Nana Vasconcelos, Evelyn Glennie and Django Bates. In his composition work he writes for film and theatre as well as the concert hall. Recent works include: a major work for the Bath International Festival; a song cycle project with Company Paradiso and John Hegley (Sony Gold Award 2010), and a major TV documentary for Qatari National Day. He also works as percussionist and musical director at Shakespeare's Globe, is composer in residence for Brighton's Radio City Theatre and plays for the retro-futuristic theremin and robots band, Spacedog.