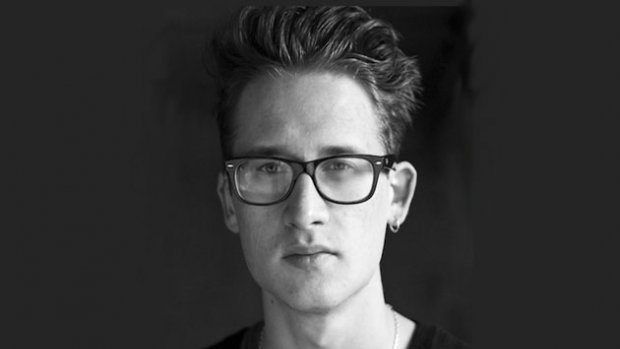 Rebecca Saunders’ music occupies the strange wildernesses that exist between pairs of extremes. It dwells in the uncomfortable recesses between sound and silence, between pitch and noise, between the abstract and the concrete. Gestures can flit unerringly between tranquility and violence; sounds appear static and yet communicate a relentless and exhausting dynamism; each composition is at once as crudely and roughly hewn as a paleolithic tool and as fluently and immaculately constructed as a chronograph pocketwatch. This is what makes the experience of listening to Saunders’ music so extraordinary.

Molly’s Song 3 - shades of crimson refers to Molly Bloom’s monologue from the final pages of Joyce’s Ulysses. The three protagonists of the piece - viola, alto flute and steel-stringed acoustic guitar - converge to form a single voice, whose tone changes constantly as gestures and sounds are deployed in varying combinations and intensities. As in Joyce’s text, certain sonic ideas recur throughout the piece - glissandi and pizzicato from the viola, breath noises and flutter-tonguing from the alto flute, barre chords, percussive sounds, and sustained E-Bow tones from the guitar. These sounds retain aspects of their overall shape through each new iteration, but appear distorted in the altered contexts that surround them. They are simultaneously alien and familiar, like the faces of long-dead relatives.

Twice, the viola breaks away from the ensemble in order to deliver an impassioned soliloquy of its own, and the voice becomes focussed, direct, immediate. Because the complexes of sounds that have preceded these moments have required such intense scrutiny, we are forced to attend to every minute detail of the viola’s sound - the tiny imperfections and deviances in tone as the bow moves across the string, the percussive sounds of the fingers as they land on the fingerboard, the unintentional breath sounds made by the player as they concentrate on the page in front of them. The expressivity of these sections is borne of the murky space between intention and accident. We are faced with a portrayal of the limitations of human execution.

It takes twenty seconds for the piece to destroy itself. The aching tones of the viola are suddenly obliterated by a blast of static from four radios arranged in pairs at either side of the stage. The immanent logic of the piece has been shattered. We have followed the voice to the climactic point of its soliloquy only to find that a fistful of pages has been torn out from the script. From the ensuing silence emerges the unmistakeable tinkling of a single music box. It is playing Johann Strauss II’s Der Kaiserwaltzer, and it continues as the viola, then the alto flute and guitar return. There is something deeply sinister about the fact that the most easily recognizable melody that we hear over the course of the piece only ever acts as a surrogate for silence.

The alto flute and viola exchange screams, setting off ricocheting glissandi in the guitar part as the piece draws to a close. Eventually, the substance of the screams deteriorates and we are left with a series of throttled attacks in the viola and alto flute. In the negative space where the screams used to be, we can hear the mechanism of the music box winding down, inch by inch. In the pocket of silence between the final ping of the music box and the chord that concludes the piece, the viola executes a slow and painful glissando, from tenor to dog-whistle pitch. This glissando is, to me, a pencil sketch of the existential condition of Saunders’ music. It is the cartography of a wilderness between two extremes.

Find out more about  Molly's Song 3 - Shades of Crimson

Browse works by Rebecca Saunders in The Collection

Laurence Osborn (b. 1989) read Music at Hertford College, Oxford, studying Composition with Martyn Harry and Martin Suckling, before graduating with First Class Honours in 2011. He went on to study for an MMus in Composition with Kenneth Hesketh at the Royal College of Music, London, where his postgraduate studies were generously supported by the Ralph Vaughan Williams Trust and the Valerie White Trust. Laurence won prizes for composition while studying at both undergraduate and postgraduate level, including the Adrian Cruft Prize for Composition.