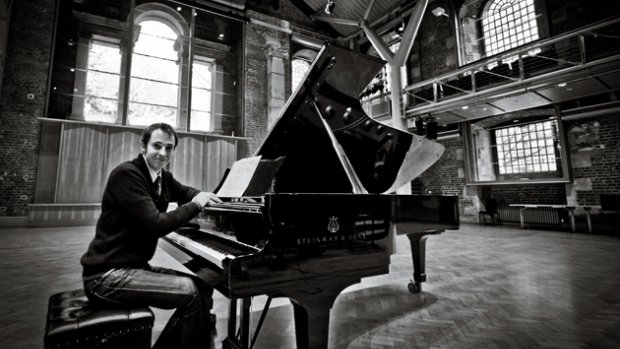 Spotlight: Aaron Holloway-Nahum, Composer, on Patrick Nunn
"The listener is made to wonder just how deep the connection between the sounds and the piano material lies"

The first time I heard the music of Patrick Nunn was in 2006 at the Royal Academy of Music. All of the students had been drawn into a project related to Spectrum, an initiative by pianist Thalia Myers to commission serious contemporary music playable by amateur and student pianists. As I recall, none of us had any idea what to write, and the first workshop was a bit of a disaster – with only three or four of us producing any music at all. Eventually, everyone did compose a piece and there was a concert, with Thalia performing all of the new pieces alongside some of those pieces that had been commissioned for the series. Among one minor student-catastrophe after another, I remember being suddenly shocked out of my stupor by an extraordinarily clear, enticing, and expressive movement from Patrick Nunn’s Music of the Spheres.

Score extracts reprinted with permission of the composer and publisher.

Patrick eventually composed six miniatures, each inspired by and featuring sounds Dr. Donald Gurnett had compiled from data taken onboard Voyager I and II. Data gathered from various celestial bodies was converted from data into audio, cleaned, processed and filtered.

The sounds are very beautiful, but perhaps not so very extraordinary when taken among the full breadth of noises that have appeared in electroacoustic music over the years. What makes Patrick’s work so unusual and striking is its extraordinary ambiguity and the breadth of character that arrives out of such limited material.

The listener is made to wonder just how deep the connection between the sounds and the piano material lies. Was there a spectral analysis leading to chords? It seems far too sensuous and sensitive for this. Was it simply arrived at by ear? Though not impossible (one thinks of Enescu’s study on bells), it would be an extraordinarily sensitive composer who could come so close to mimicking a sound without stepping all over it.

Two highlights for me are the middle movements Ice Giant (Mov. II) and Giant Failed Star (Mov. III). Ice Giantfeatures a low, rumbling piano, that so nearly grows into all-too-familiar thunder, but instead fades and then fades further again. Giant Failed Star, on the other hand, with its high repeated notes amongst an assortment of electronic calls and whistles, made me imagine the pianist as a stranger out for a walk in some sort of cosmic rainforest.

Excerpt from Music of the Spheres: Mov. II – Ice Giant

Whenever I hear a composer complain - as I myself have - that they are having trouble writing for piano, my (unspoken) thought is that they are probably trying to write too many notes. Matching the virtuoso masterworks of the piano repertoire seems to almost require the composer to fill out every run and chord to the tenth-finger, and there’s a way in which each added note pushes the character of the composer and piano closer and closer to an unappealing mass of gray.

Meanwhile, while even a pianist as poor as I am can navigate most of Patrick’s Music of the Spheres (the works do increase in difficulty from Mov I – VI), each movement feels like a new universe being discovered: distinct and very colourful indeed.

Patrick Nunn and Thalia Myers at the Royal Academy of Music

Works by Aaron Holloway-Nahum have been performed across the world by ensembles such as the BBC Symphony Orchestra, London Sinfonietta, Britten Sinfonia,ECCE Ensemble, Dr. K Sextet, duo Harperc and players from the London Symphony Orchestra. He was the 2014 Polonsky Fellow at theAspen Music Festival, and spent 5 weeks living and working in the home of Aaron Copland as a Copland House Residency Award Winner.His work has has been commissioned by Sound and Music, the Britten Pears Foundation, RVW Trust, Leverhulme Trust and Mary Richmond Concert Society, and has appeared at numerous international festivals including the Aldeburgh Music Festival, Etchings, highSCORE, Dartington and Bowdoin.  Aaron’s music is published byCadenza Music.  He has had numerous broadcasts on BBCRadio 3 and is a regular host on ResonanceFM.

The score of Music of the Spheres can be viewed online at Cadenza.

A recording and preview of Music of the Spheres, performed by Thalia Myers is available at Red Sock Records