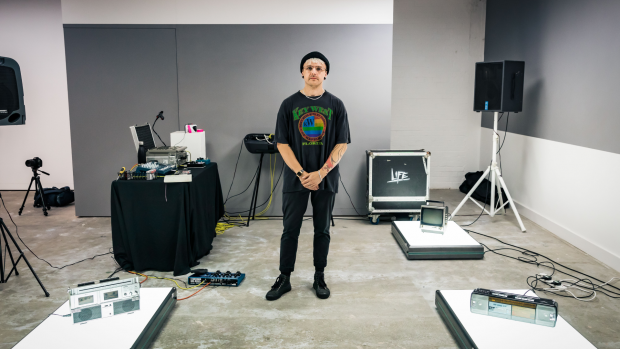 In our new 'Sounds of...' series on the British Music Collection, composer, producer and music-maker and part of Sound and Music's Composer-Curator programme, Stewart Baxter brings our attention to some of Hull's local composers past and present.

In our new 'Sounds of...' series on the British Music Collection, composer, producer and music-maker and part of Sound and Music's Composer-Curator programme, Stewart Baxter brings our attention to some of Hull's local composers past and present.

My name is Stewart Baxter, I am a creative, an artist, a photographer, a composer, producer and music maker from Hull. I have lived here forever, and I have never been bored. I find new inspiration and beauty every day and I am constantly reminded of why I love this city. Hull made me into an artist because it allowed me to create my own space within it, and afforded me cheap enough rent to take the necessary risks. My community has not only embraced me, but has reminded me of the importance of staying humble and grounded.

We can all be guilty of taking things for granted [insert reflective Covid paragraph here], and one thing I have gotten too used to is the fact that Hull is a city of music. Now, I don’t mean that in a way of industry success (yes we have had a few big hitters) but in in the way that music is in our DNA. It’s hard to explain, but music to us is something we just do...we call each other up and we make music, then we get back to our lives. We give music away. We gift son gs to one another. We play on each others' records. We collaborate and encourage our peers and competitors. We celebrate the very fact we are able to make music, and sometimes that is enough. The great thing is this keeps us humble, honest, and reasonably un-tarnished by stats and the industry treadmill career model. The perhaps negative part of this beautiful attribute is that we sometimes struggle to turn our art into a career, or even admit it could be a ‘career’.

All this aside, I feel we are collectively getting better at celebrating our successes, allowing ourselves to be on a pedestal without the guilt we seem to award it, and I for one am happy about that. I want the world to not only know we exist, but to also know what we add to the cultural makeup of it.

So with that in mind... I want to bring your attention to a some local composers past and present who have been influenced by their space and place, and allowed themselves to carve out their own unique journey in this strange and wonderful world of sound and music...

The Dyr Sister is the brainchild of multi-instrumentalist Sally Currie (who was also part of the anti-folk trio Awash With Antler back in the day). Combining contemporary folk with post-hiphop and electronic music genres, The Dyr Sister’s songs are delivered with driving percussive beats via a backdrop of strings including Viola/Guitar (Sally Currie), Harp (Stephanie Halsey) and Bass Guitar (Sarah Shiels) and layered with haunting and ethereal vocal harmonies. Recent collaborations with visual artist Anna Bean have seen the sisters create a magical wonderland and theatrical perfor-mance ‘Fairytales For The Modern Gentleman’ which was on another level and just a taste of what’s to come from Sally and her ever growing collective of creatives.

The Dyr Sister · Fairytales for the Modern Gentleman Live Demos

As a teenager in an emerging punk band, in a city that at the time felt like you could count every band on two hands, I looked out for elders and mentors to inspire me and show me what was pos-sible. Yol was one of those people, who from a far made me question music, art, politics and the possibility of going against the grain. Doing the opposite of what is expected, and seeing the beauty in the action of it. While I was making pop hooks, Yol was making noise. Its only now I really get it, and his commitment to his process is inspiring.

“Yol’s approach seems to be to absorb that which is around him, the fragmentary, the minutiae, and regurgitate it through distending, absurdist ritualistic cantillations.” - Crow Vs Crow

Knomad Spock (Sam Elmi) is an enigmatic mixed-race British-Somali poet, rapper and new folk singer-songwriter, who explores musical genres as extended analogies for his own multiethnic her-itage. He is rooted as much in the northern working class that raised him, as in the Somali nomadic traditions of his inheritance. As a songwriter and multi-instrumentalist, and in true nomadic keeping, Knomad Spock blurs the borders between punk, rap, folk, jazz and the avant garde.

Sam started playing in punk bands in the early 2000’s, and went on to be a prolific poet and rapper who made a lot of great work but never released anything officially. It was only in 2021 when Sam gave me his Neo-folk album ‘Winter Of Discontent’ that I had to set up a label just to make sure it got the release it deserved. This body of work came from nowhere and offered a level of musicality and songwriting that has been compared to Mark Hollis and Bon Iver, and been championed by Lauren Laverne, Adam, Walton, Janice Long and BBC Radio 6 Music.

Mark Slater is a Hull-based producer, composer, and pianist whose music spans complex experi-mental electronica and delicate instrumental textures. His forthcoming album – Insula (E2 Music) – weaves intricate textural layers and propulsive rhythmic flows to create an enticing, cinematic en-semble of pianos. As a co-producer with the Nightports project, Mark has created albums with pia-nist Matthew Bourne, drummer Max Hallett (aka Betamax, the Comet is Coming), and bassist Tom Herbert (Polar Bear/The Invisible). He is also one half of Subsona with guitarist Stuart McCallum. His music has been broadcast on BBC Radio 1, 2, 3, 4, 6 Music and on BBC One.

“The music was done on the premise that everybody is capable of making music whether they real-ise it or not, and a musical instrument is something that simply makes a noise. Therefore anything that makes a noise is an instrument, and anybody that can make it make a noise is a musician.” - Genesis P. Orridge

‘Basil Kirchin was a maverick musician and pioneering composer who is credited as a founding fa-ther of ambient music. Yet despite being hailed by acts such as Brian Eno and St Etienne, he re-mains an obscure figure. He pioneered techniques which are now commonplace but were consid-ered radical at the time. These included recording sounds he came across and then cutting, splic-ing, slowing down or stretching the tape to create strange, new noises’ - Pritty Mistry, BBC News.

I found out about Basil after his death in 2005, realising that he was still making music in his house on Boulevard in Hull, where I grew up, and had been there my whole life. It makes you wonder who and what is happening right under you nose.

In the two years since his first single “Colours” in 2019, Downtown Kayoto’s versatility has drawn comparisons with R&B contemporaries like Frank Ocean and Daniel Caesar. Born in Zimbabwe but based in Hull, his catalogue envelops themes of identity and self-expression.’ Line Of Best Fit

DK is part of a new wave of young artists coming out of this region ‘genre hopping from an alt-R&B base’ carving his place in the area as a totally original artist. DK is a visionary, he knows his aesthet-ic, his sound, and has complete control over the production, arrangement and mixing of his work. It says a lot when a music creator can harness their own strengths and also know when to collaborate with different creatives to create the best work they can. DK has something very special, an ear as a hit -maker and producer of his own destiny.

Formed in early 2010 by then audio engineer Carl Conway Davis and then Hip-Hop producer Pat Dooner, The Broken Orchestra began as an experiment, a way to learn and as a creative output. Ten years on, and those fundamental aspects still remain, even if those initial roles have shifted somewhat.

Ten years of creativity, expansion and development has seen The Broken Orchestra morph into more than just a music production duo. They create soundtracks for landscapes, audio walking tours, radio dramas and sci-fi adventures, perform live as a five-piece band, and release music into the world on physical and digital formats – all in a bid to connect with the audience.

Other notable composers from around our way: