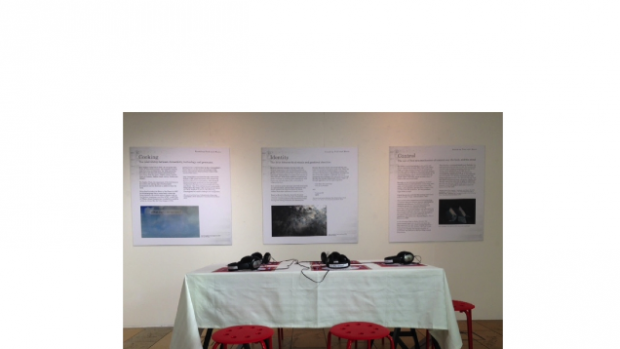 "Through our installation we invited visitors to listen to five pieces, while sitting at our musical dining table."

Laura Seddon details the Sounding Food and Music exhibition, which was curated by Contemporary Connections at the Brighton Jubilee Library Exhibition Space, in January 2015.
Spotlights

The Sounding Food and Music Project considered the connections between eating, dieting, gender and sound. We were interested in the relationship between food and our bodies as expressed in music and, more specifically, how women composers tackled the relationship between women’s bodies and food. Through our installation we invited visitors to listen to five pieces, while sitting at our musical dining table. This music by Daphne Oram, Amy Cunningham, Pia Gilbert, Helen Bowater and Nicola LeFanu, explored different aspects of food and eating. The exhibition display surrounding the installation highlighted key themes: cooking, identity and control, as discussed in commissioned essays on each piece by Cathy Lane, Holly Ingleton, Lauren Redhead and Laura Seddon. These themes emerged through musicological research on women’s music, thus while the project highlighted five selected key works, it was equally concerned with discovering the historical breadth of women’s musical explorations of food, as displayed on our graphic family tree. These works ranged from 19th century drinking songs to Phyllis Tate’s Christmas Ale (1967) to Jan Preston’s Eat Chocolate and Cry (2006 and 2009). 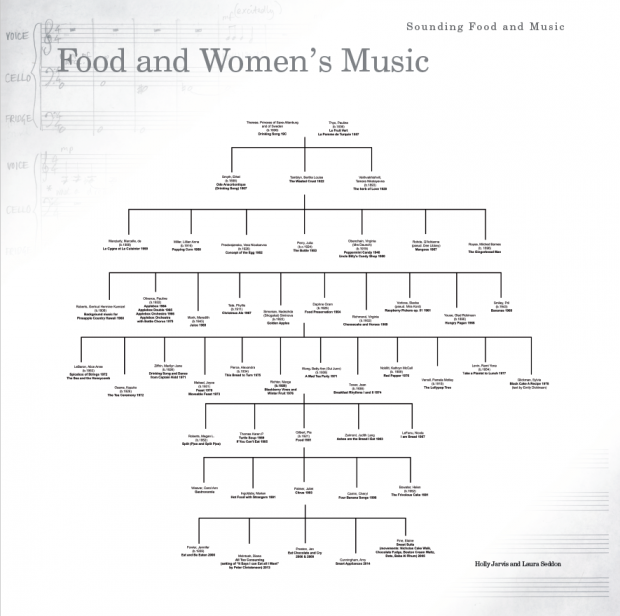 Cooking: The relationship between domesticity, technology and processes.

Little is known about the context of the composition of Oram’s electronic piece Food Preservation. The sounds are reminiscent of both noises made by kitchen appliances and the chemical processes of food decomposition. Composed in 1964, Oram was interested in sounds of the future, having created the Oramics Machine in 1957, which converted visual information into sound.

Oram started her career at the BBC as a music balancer, becoming one of the directors of the Radiophonic Workshop in 1958. After leaving the BBC she set up her own workshop at Tower Folly, a converted oast house in Kent. Oram converted her domestic environment into a creative space as part of her vision to bring music back into the home, through the development of technology.

In Smart Appliances Cunningham combines this past vision of the promise of the future technology with present day promises taken from contemporary advertising of advanced domestic products – in this case smart refrigerators that you can communicate with from your phone. One of the distinctive and recognisable things about the fridge is the buzzing drone it gives out when switched on and it is this that Cunningham has used to underpin her composition.

Identity: The links between food rituals and gendered identities

I am Bread was composed in 1987 and was premiered at the Brighton Festival. The song is a setting of Brendan Kennelly’s poem Bread, which depicts memories of his grandmother making bread. The poem uses bread as a metaphor for life, the male voice and also the bread itself require the grandmother to make and shape life.

LeFanu alters the text, flow and tone of the poem, most significantly changing the voice of the poem from male to female. The change in title from simply Bread to I am Bread suggests female strength in an everyday experience, self-empathy and defiant self-love.

Control: The use of food as a mechanism of control over the body and the mind.

Born into a Jewish family in Germany, Gilbert emigrated to New York in 1937. After settling in Los Angeles in the 1940s, she worked with Schoenberg, Stravinsky, Alma Mahler, John Cage and Merce Cunningham. She had a particular affinity for dance, often composing for choreographers and later writing the textbook Music for the Modern Dance.

Gilbert’s piece Food sets two texts by John Cage Where Are We Eating? and What Are We Eating? (38 Variations on a Theme by Alison Knowles). On the surface the ensemble (Soprano, Baritone, Trumpet, Percussion and Piano) present a humorous romp through tales of diets consisting of miso soup, nuts, and vodka, and cooking nut balls in motel ovens. Yet as the actual food recedes into the background, social relations are heightened.

Bowater’s The Frivolous Cake sets Mervyn Peake’s nonsense poem, which appears in Titus Groan, the first novel in the Gormenghast Trilogy, published in 1946. Bowater describes the ‘mixture of fantasy, food, freedom and fanciful seduction in Peake’s work as irresistible.’ The 1990 musical work is for an unusual combination of mezzo-soprano and ensemble (flute, clarinet, bass clarinet, soprano sax, cello and percussion).

The Frivolous Cake tells the story of a fruitcake being chased across the lilac sea by a knife, much to the amusement of the catfish licking their paws in delight. It is a metaphor for the relationship between the two teenage characters in Titus Groan, Fuschia (the cake) and Steerpike (the knife).

Sounding Food and Music was instigated by Contemporary Connections, a non-profit arts organization dedicated to providing research on historical women’s music as inspiration for contemporary practitioners. The pieces in this exhibition were recorded during a concert at The Old Market, Hove in December 2014 by The Centenary Ensemble. 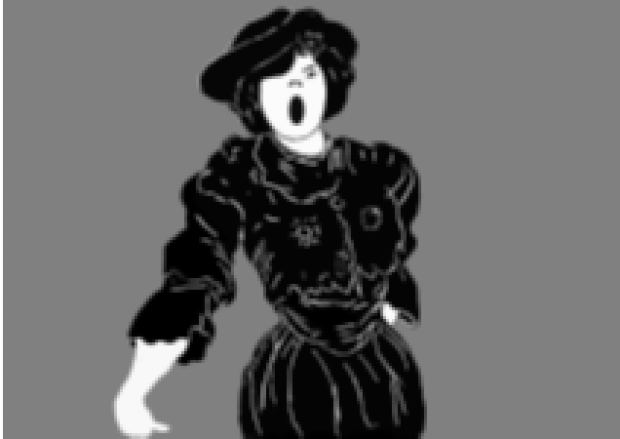