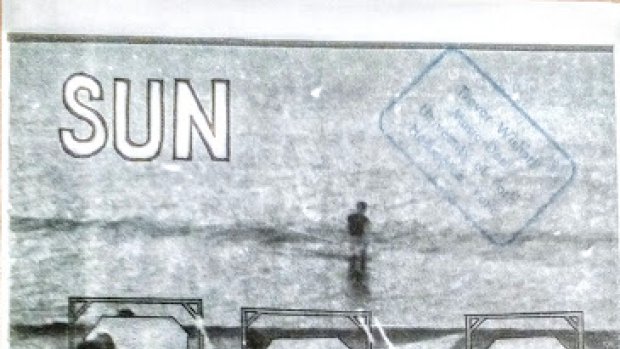 Seaside and Sun by Trevor Wishart and Friends

"Creative activity here, is the ability to enact a temporary alternative reality..."

Teresa Winter details four weird and wonderful musical events put on in the seventies, which she uncovered when exploring the Collections' physical archive at Heritage Quay.
Spotlights 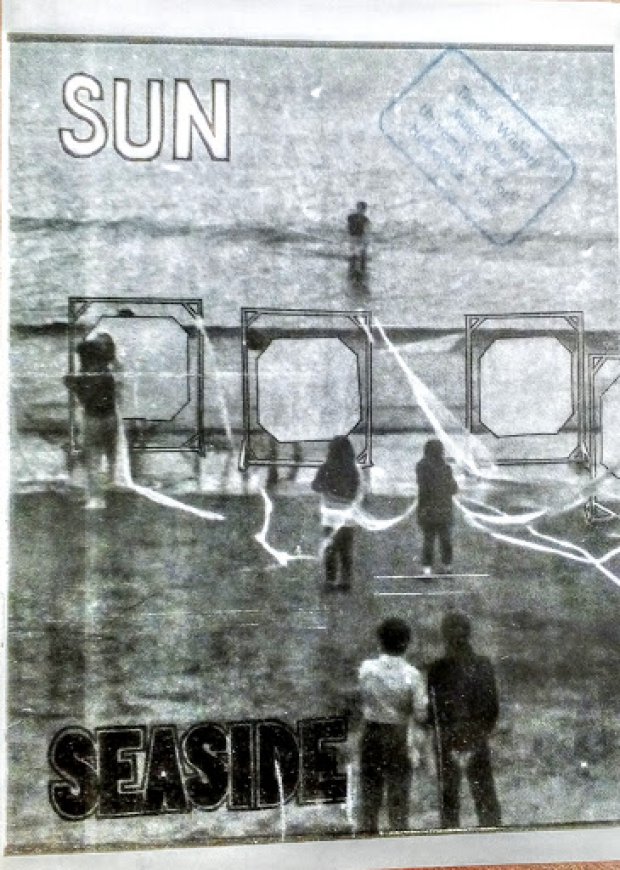 I came across a small, black-and-white, handwritten and photocopied pamphlet amongst the experimental music scores in the British Music Collection that immediately interested me. It said ‘Sun’ and ‘Seaside’ on the front cover in bubble writing, with a blurry photograph of people on a beach looking out to sea. It was difficult to make out what was happening in the picture. There were a few people on the sand and a couple of people in the sea, and some drawings of what looked like gongs, collaged over the photo on the edge of the sea, with something white and wispy coming off them. In one of the corners of the page was a blue stamp belonging to Trevor Wishart, of the Music Department at the University of York.

Inside the pamphlet was a subtitle: ‘Four Events for the holiday beach’. There were also four names- Mick Banks, Al Beach, Roland Miller, Trevor Wishart -and a photograph of (I think) Wishart playing a flute with his trousers rolled up to his knees, as if he was walking along the shoreline. The pamphlet was a document of what happened as those events unfolded along the seafront of Filey, East Yorkshire in 1971.

‘Rakeman’ was an event enacted by Al Beach. He is described and depicted ominously, wearing only black rubber garments such as waders, gloves, a hat and a cape. Rakeman spent the morning and afternoon improvising with three specially-constructed wooden rakes and “SAND, as [an] enormous sculptural-writing-drawing surface.” Some of his creations included patterns, gravestones and “projective geometry” etc. 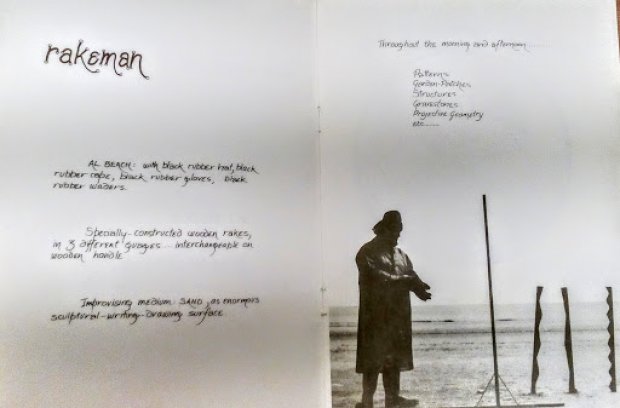 The next event by Mick Banks, ‘Red-Green-Orange-Purple…’, consisted of four players, each dressed entirely in one of the four colours from the title. They began separately at opposite ends of the bay and walked inwards towards Filey, carrying a flag and a pot of paint in their chosen colour, which they used to paint a piece of flotsam found on their journey towards each other. Once united in the centre of the beach, they undertook a series of “appropriately coloured events, including a coloured lunch.” In front of a crowd of onlookers, the performers were given painted tins of food depending on their colour. The tins were not labelled with their contents - sometimes the food inside was the same colour as the outside, but not always. Due to their unpredictability, “the opening of the tins was a dramatic moment!” As the tide began to come in, four coloured chairs were installed on the sea line and the event was concluded with the launching of coloured rockets, before finally burning the chairs.

During the ‘Beach Machine’ event, Roland Miller trawled the seafront alone with a beach machine to perform his “beach testing” in the morning, before being joined by “enthusiastic beach-tester apprentices”. The pamphlet emphasizes that - being a serious business - the procedure for beach testing was strict: 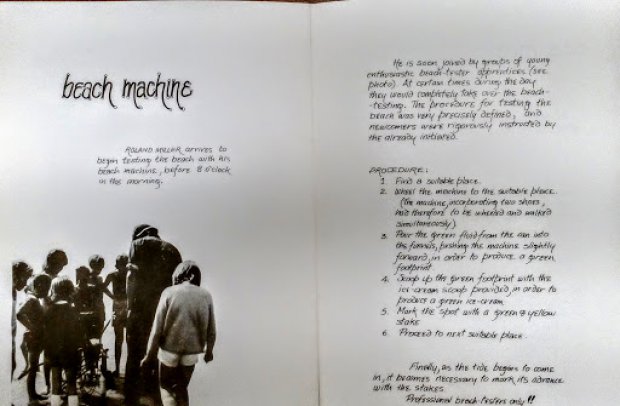 ‘Sea Music’ - “music to complement the sounds and colours of the evening sea”- performed by Trevor Wishart and players, was the finale of the events. Six specially-made white octagonal gongs of different thicknesses were placed along the advancing sea shore and played using the sounds of the sea as a “cantus-firmus” for inspiration, as well as flutes and singers. White muslin fabric was webbed around the gongs, players, sea and sand to reflect the white of the sea spray. As the performance took place, the sea advanced towards the sea wall, demolishing the setup of gongs and performers, leaving a solitary gong and flautist trapped between the sea and sea wall. 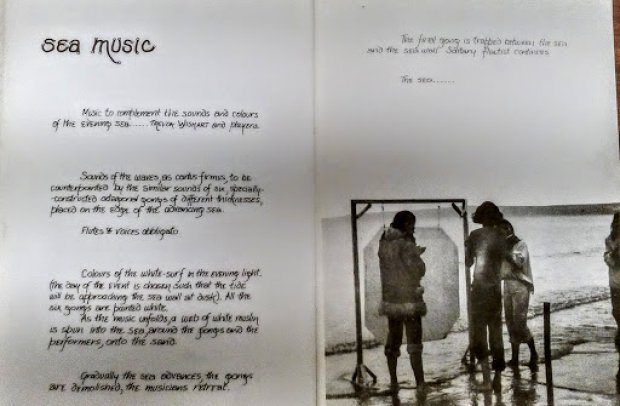 Seaside at first appeared to be a provincial English version of the artistic happenings associated with mid-twentieth-century avant-gardists, trying to challenge the boundaries of art. However, another item in the archive, a book called Sun by Wishart and friends, put the pamphlet into context. It was bigger, but in the same handwritten and drawn style. It contained similar accounts of more public projects and events, as well as short, speculative essays and diaries that instructed on interesting ideas for miscellany, such as pieces of music and recipes. The various events between 1970 and 1972 documented in the book-- ‘Carnival’, ‘Seaside’, ‘Landscape’, ‘Wicked Wizard of Whitworth’- were conceived as collaborative educational projects for school children occurring in public spaces.

Throughout Sun, Wishart and friends describe the role of “specialist ‘Arts’ and ‘Artists’” as they exist in their distance to the “basically economically functional and uncreative social context”. We categorise our lives into different areas - work, home, holidays, and hobbies - and we tolerate remaining unfulfilled and unstimulated by our jobs and environments, because it is deemed necessary to a functioning economy. Creativity and imagination are channelled only into certain kinds of activities such as painting, musical performance and technological development, rather than being perceived as integral parts of all areas of human experience. We forget that most things that matter to us our in our lives are all fictions that require our collective imaginations and creative energies to sustain. Separating creative thought and action from the rest of life is a necessary reaction to the all-pervading alienation of socio-economic reality: “Creative thought must be intrinsically in conflict with an environment which is functionally delineated, stereotyped and limited.”

In Sun, an alternative reality is imagined: ‘creativity as opposed to “Art”’. The point behind a project such as Seaside is, as Wishart and friends write, “not conceptual”. There is nothing signified in the activities, no fixed meaning, no work of art, no showcasing of the individual’s artistic originality. It is simply an organised opportunity to take pleasure in being, and doing things together, for their own sake in our environment. Creative activity here, is the ability to enact a temporary alternative reality, exploring the idea of the creative society: not “merely another set of values and conventions, but an open-ended, self-critical society in a continual state of fluidity and change.”

Seaside and Sun by Trevor Wishart and Friends