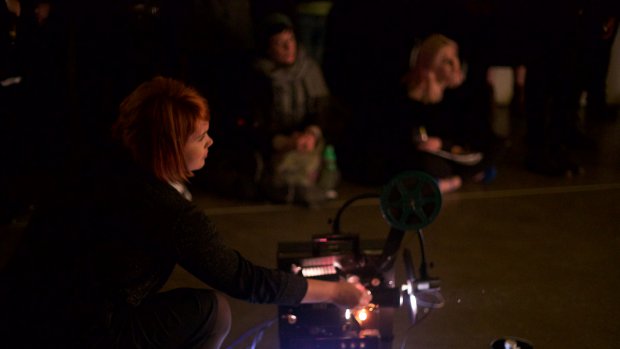 Sally Golding on Embedded with the South London Gallery

"Working professionally as an audio-visual archivist, I’ve always been a bit of a practical science geek, and generally have a love for optical illusions that we might see occurring around us on a daily basis – especially the simplicity of reflections as our attention is drawn to interpret them."
New Voices

Audio-visual artist and archivist, Sally Golding, elaborates on her profound fascination with phenomenology and reality, and how her sensory installations translate to her audiences. After working in residence with the South London Gallery, Golding expresses her gratitude for being able to ‘run’ with her ideas, which have ultimately developed into a more defined interest in sound recording, of which she poetically describes as a meditative ‘process of self-reflection’. Golding also explains how her Unconscious Archives series is an advocate of the importance of ‘community,’ whilst describing the inextricable relationship between curating and creating…

Overload, cacophony, threshold - these are a few words which spring to my mind - though I don’t consider them to be narrowed associations, such as what might be thought of when reducing experimental music practices to ‘noise’. My sound work has been described by others as an ‘impasto’ (Stuart Heaney, Psyché Tropes) – a layering and textualization of sound, and it's also been described as a ‘banging, pulsing statement of audio-visual intent’ (Harriet Warman, BFI Sight & Sound), which seems appropriate given my use of amplified lighting devices such as camera flash units and laboratory strobe lights. My work has a physicality – even a psychedelic presence.

You describe yourself as a multimedia artist – would you ever call yourself a composer?

I consider the approach and delivery of my live performances to be ‘compositions’ of light and sound - which is the best way to describe what I do and how performances unfold. Specifically for my expanded cinema performances, I developed a DIY technique for creating ‘darkroom compositions,’ - working on the optical soundtrack area of 16mm film. For these works, I photochemically prepare thin, worm like physical waveforms which I cut away from the film, label, stick to the wall of the darkroom, and then proceed to ‘compose’ with these in the dark in my head, imagining what the final composition may be without being able to see or hear it yet (it’s a long process, before I am able to photochemically process the film and listen back). In this sense, I am reminded that recently my performances were described as resembling ‘a séance’ (Steven Ball, Senses of Cinema) – so perhaps I am a strange kind of composer.

You also work as a curator – tell us more Unconscious Archives.

I started the Unconscious Archives series in London, based on my experiences running events and festivals in Australia such as OtherFilm and Psycho Subtropics, as I genuinely believe in the sense of community and the resulting dialogue that these styles of events unearth, expose and bring to the surface. The series initially began because I wanted to explore and encourage an artistic discourse examining the synergies and dissimilarities which might define both live film art and sound art. I was simultaneously enamoured by the academic, even ‘tribal’ discourse applied to sound art practices, and yet open ended about the discourse applied to expanded cinema that seemed to me either too historicized or too specific to screen based work associated with the experimental film scene. I wanted to experiment with what ‘liveness’ might mean – I felt enriched by the vibrancy of the London scene where emerging and established artists and audiences could mix together to create exchanges, and I also felt there might be a challenge to potentially rise to in terms of what actually was and wasn’t being programmed together in a city like London!

How do you see the interaction between curating/creating?

At the time when I began my art practice in earnest (around 2004), I began it hand in hand with curating, which has really become indivisible for me and I do ultimately see the two as inextricably linked. Curating is a form of community participation, as is performing at a festival or event in some ways. Both present learning opportunities – experiments in the nicest possible use of the term. I don’t want to sit around and wait for someone else to programme an event; I want to reach out to the vibrant global and local community and offer what I hope are opportunities and alternatives for the exchange of creative ideas. I’ve learnt some valuable lessons from combining the two - mostly about what artistic discourse really means when put into action - and I’ve been humbled and inspired by the participation and responses the two strands have generated from artists and audiences.

What attracted you to apply for the Embedded programme with South London Gallery? Have you been on similar residencies before?

Embedded leapt out at me as an opportunity to move beyond my comfort zone, to loosen my grip on what I already work with in live film performance, and to instead develop and push different strands of my practice such as installation and sound recording. I exude a lot of energy and effort creating and delivering performances - which ultimately only last for the duration that they are performed and are classically hard to document. I was interested in the idea that returning to an exhibition based format would provide some kind of ‘residue’ for my work - which makes it sound a bit like ectoplasmic art goo. I’ve never really undertaken a residency before - except for the wonderful experience I was afforded by Asialink, Australia, with the DIY festival Experimenta in India run by filmmaker Shai Heredia, which I remember as being at once a beautifully buzzing culture shock yet an intuitive experience in finding the common ground of artistic issues to gnaw over.

Describe your experience working with the South London Gallery. How do you think it went?

Curious, daunting, inspiring… The South London Gallery are a world class gallery and I’ve been privileged to work with the team at SLG particularly Simon Parris, Programme Manager, and David Angus, Gallery Technician, who have really let me run with my impossibly ambitious and abstract ideas - they didn’t think it was too weird when I told them I wasn’t sure what I was making for the exhibition as it was ultimately about the experience and the environment that would potentially take place when the viewer entered the exhibition space and thus turned participant via the deployment of reflections and shadows. Everything I discussed with them seemed so ironically ephemeral and fleeting again (compared to what I thought I was temporarily leaving behind in performance work). I think their professionalism kept me on track - I might focus too much sometimes on the ‘nuts and bolts’ involved in planning and staging, but it’s often like grasping at thin air otherwise!

What have you got planned after the project ends?

Sound recordings are appealing to me more and more as an artistic outlet: strangely for me, they act like a meditation – a focusing in and a process of inner reflection. Maybe the ‘residue’ I am seeking will become more like an ‘amber’ – a goo that settles and congeals, though not into a fossil I hope! Yet, it may be something that might take a natural form as I feed it all of my various processes and materials, feeling my way through them and into some other structure.

Where did your interest in ‘hallucination’ and ‘perception’ come from?

My interest in what is ultimately phenomenology stems from my research into media archaeology, which I have previously explored to hack ‘industrial cinematic systems’ for appropriation and inspiration in my early expanded cinema works. Working professionally as an audio-visual archivist, I’ve always been a bit of a practical science geek, and generally have a love for optical illusions that we might see occurring around us on a daily basis – especially the simplicity of reflections as our attention is drawn to interpret them. I’ve also been artistically inspired by great film artists such as Paul Sharits who created colour flicker films layered with harsh sonic cut ups. Sharits may have arranged the elements - flashing colour fields and dislocated words - but it is your own brain that makes you think that it spoke to you, said something that wasn’t there, did something that didn’t exist - it means something else to you as it bashes its way through your psyche.

Do you feel that your work closes the gap between the audience and performer?

Through the process of creating these installations I’ve been considering what an object-viewer relationship might look like, and what it means when we consider ourselves perceiving ourselves within the work – if this is an interesting basis for a participatory experience in art or not. For me, the installations have an element of questioning the nature of reality: one of the works involves the viewer’s reflection, potentially resulting in an ‘embodiment’ of the space. I wanted to explore and open up ideas around what would happen if the installations operated partly in a sensory zone which prompt feelings of the viewer as an Other: an emptying out of the Self and a pouring into the object.

Conceptually, how do you enhance sounds with visual elements, and vice versa?

Audiovisuality is a kind of doctrine for me. I’m interested in the relationship and effect of the two, which I often think of as a ‘synesthetic’ relationship – not in the truest use of the term (though that physiological condition is also an area of exploration in audio-visual art) – but in a bastardized play which forces people to consider why exactly those two elements are there, and why they are being deployed together. I’m interested in the primal nature of making and performing sounds together – the space between seeing and hearing – looking for a lost primitive sense that’s no use to us today in our modern world apart from helping us escape from it or conversely sharpening our awareness back into ‘the real’ again.

Any recommendations of composers/artists to look out for in the next year?

I love the hand built electronic instruments and the performance practices of two UK based artists Phantom Chips (from Australia), and Ewa Justka (from Poland). These two ladies don’t spare the audience as they unleash their noise devices, and in Phantom Chips’ case, entangle the audience with her playable and wearable sonic instruments. I also love what UK music producer and creative technologist Spatial (who I have worked with recently on collaborative performances) is doing with his live audio-visual projects in terms of combining software with a physical deconstruction of the performance space. I'm excited by the vinyl release by Australian artist Ross Manning on the Room40 label, which hopefully will lead to the exhibition of Manning's incredible and highly acclaimed audio-visual installations being shown in the northern hemisphere sometime soon. UK artist Graham Dunning’s Mechanical Techno project is incredible - mixing dub with entropic ghosts. I'm also loving the anarchy that is the coming together of the performance outfit Secluded Bronte (Richard Thomas and The Bohman Brothers) with James Holcombe, who seem to have no regard for format mixing vocalization, with live and projected 16mm optical sound recording and the playing of improvised household objects. May they continue to confuse and disrupt our senses.

For more information about her upcoming exhibition at the South London Gallery click here.