"What brings me back to that period of my artistic career is a kind of transgresive approach to intensity, which I try to generate in my present work" 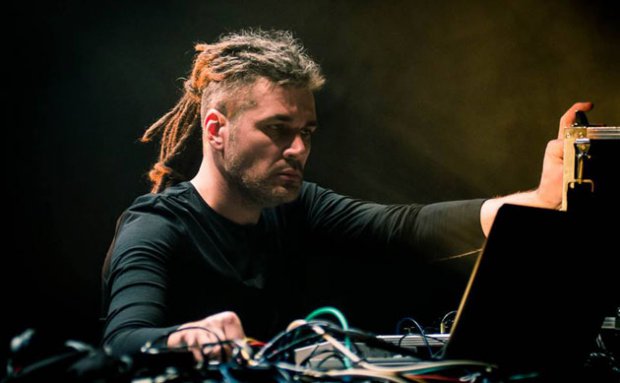 Robert Piotrowicz is a sound artist, composer, and improviser. He has written radio dramas, sound installations, and music for film and theatre productions both for electronic and acoustic instruments. As an instrumentalist, Piotrowicz works mainly with his own live performance setup, developed around the electric guitar and analogue modular synthesiser. His music has as much in common with contemporary electro-acoustic compositions as it does with sound art. PIotrowicz has released several solo albums as well as collaborations with artists such as Burkhard Stangl, Anna Zaradny, Jérôme Noetinger, C. Spencer Yeh and Kevin Drumm. Other collaborators in recent years included John Tilbury, Ensemble Phoenix, Valerio Tricoli, Oren Ambarchi, Martin Klapper, Zbigniew Karkowski, Lasse Marhaug, Kasper Toeplitz, Tony Buck.

I started performing music at the age of 12. Ever since I got the courage to start my first band, I wanted to create sound by myself only. Never really committing to any professional education and training, I achieved all my skills - mostly performative - with practice only. In my teenager days I led bands playing heavy and radical rock music, I composed all our songs, and with time I moved towards more abstract and atonal music that involved more and more electronics. By the end of 90s I began to adapt my craft and abilities towards electroacoustic improvisation and came back to my composing needs.

What has been the highlight of your residency with Apartment House?

The biggest highlight was working with a very experienced and great ensemble. It was unique to collaborate with a group of skilled musicians who are committed to contemporary music with a very avantgarde and sophisticated sensibility. Anton Lukoszevieze is an inspiring and a very supportive  leader, open to new research and artistic trajectories with a great attention to detail.

The residency brief required you to develop a new work for the ensemble inspired by Dick Higgin’s concept of Intermedia. How did you approach this?

Do you always work in an interdisciplinary manner, or was this a new approach for you?

In the past I did a lot of work at the intersection of text, theatre projects, film and installation, so intermediality was not entirely a new land for me. What was new this time was the approach to intermediality that arose from the aesthetic of particular artistic practices rather than the medium specificity. I focused on body performativity and gesture performance as intermedial elements which were integral to perception of space and sound.

You began playing music playing guitar in the hardcore punk scene. Does this punk ethos still influence your work now?

Hardcore punk attracted me with its radical form in the opposition to pop music. I guess that its atomic essentialist aesthetic in favor of minimalism in a way aligns it to experimental electronic music. In those days I tried to abandon traditional way of playing rock or pop music and attempted to experiment with open-ended territories of improvisation and sound-oriented forms. What brings me back to that period of my artistic career is a kind of transgresive approach to intensity, which I try to generate in my present works. The hardcore, as I perceive and try to make today, is an intense and dense material both on horizontal and vertical planes to create tensions between sounds in spectral and temporal aspects.

What is the new music scene like in Poland?

I am incompetent to make general statements about the scene in Poland.

Some very old hardcore and metal bands - not so much recently released music.

I am far from mythologizing the artist figure as a social archetype. It is a privilege only sustained through silly stubbornness. But while my artistic practice has of course allowed me to experience and confront myself in various social and geographical context,  the price for the above often means exclusion from system of economical and cultural benefits.

I think I have always had a soft spot for Herzog. A music collaboration to one of his older movies is something I would cry for.  But I would enjoy seeing Lady Gaga perform a dance routine to one of my compositions.

I think composer and performer is who i am.

Robert Piotrowicz is in residence with the Apartment House as part of Sound and Music's  Embedded scheme. It is a special international version organised in collaboration with the Adam Mickiewicz Institute as part of the Polska Music Programme. Read about it here.

You can find out more about Robert on his website and Soundcloud.