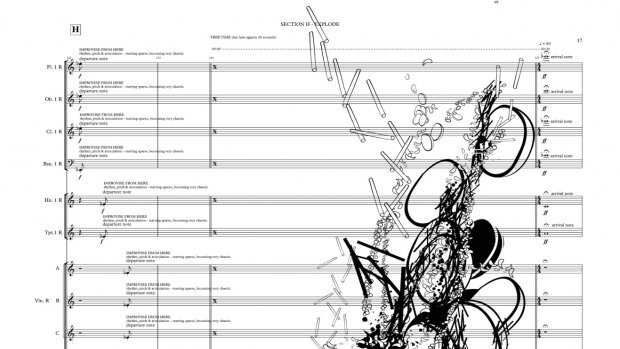 "Graphic scores can engage with the act of ‘composing’ as a kind of performance in its own right... " #BMC50

The second article in an exhibition of contemporary approaches to graphic scores by British composers. Curated by Jacob Thompson-Bell, 2017.
Spotlights: Graphic Scores

Graphic scores can engage with the act of ‘composing’ as a kind of performance in its own right – subject to the same physical movements, mistakes and serendipities as any ‘live’ musical event.

The placing of a pen on a piece of paper, tracing motion across the page, mapping out a musical space; solid sculptural objects recalling sounds or musical gestures.

The resultant lines and shapes are left over artefacts, evidence of a sonic idea or intention that can be picked up by others looking for inspiration to listen or make music. 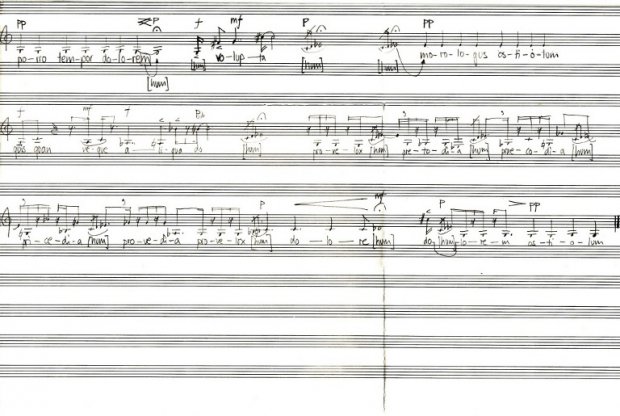 This sequence of one-page scores presents the same simple vocal melody notated repeatedly by Molitor under different compromising circumstances – whilst trampolining, writing with her foot, writing with the pen on the end of a 2m rod... This intentionally absurd process emphasises how different environments and tools profoundly affect the music composers choose (and are able) to dream up. 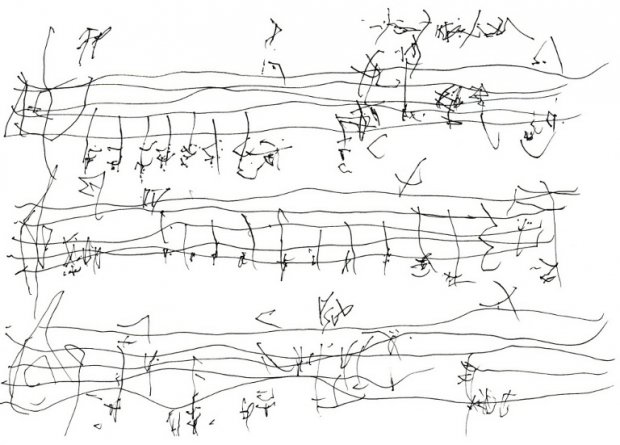 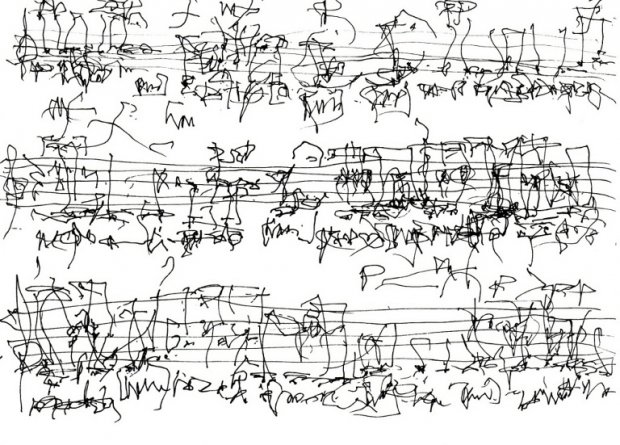 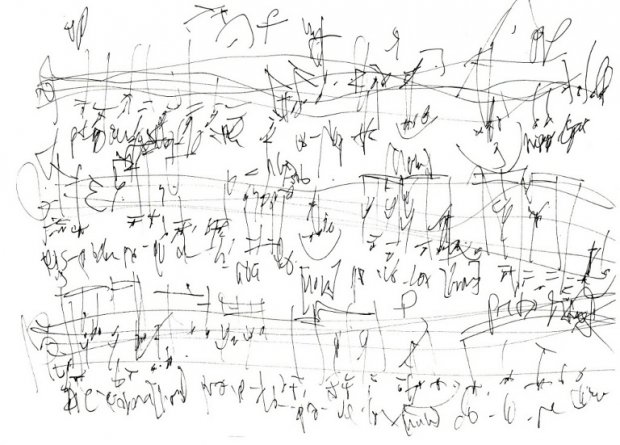 Claudia Molitor says: "Uncontrolled markings enter the score, setting the unintentional alongside the intentional. The (de)formed score testifies to a failed authorship and flawed rationalism of an initial compositional intention. The work resonates against the historicity of the score as the primary site for musical meaning." 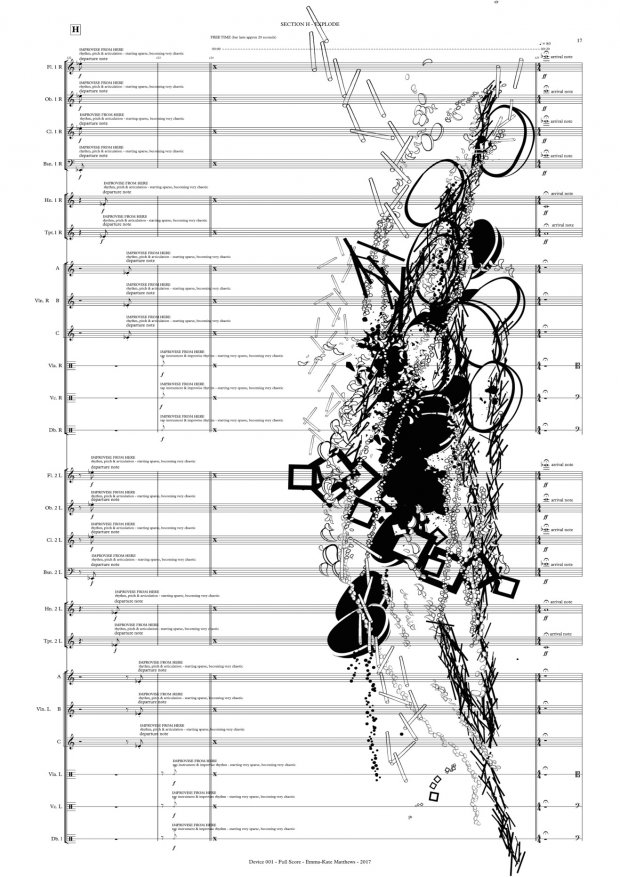 Architect and composer Emma-Kate Matthews’ score, created for the London Graduate Orchestra, seems to explode out of the confines of traditional stave-based notation.

This page is both an instruction to performers and a self-contained visual piece, performed on the page.

Matthews still considers “any score and/or drawing produced to facilitate the performance of a musical composition, as a means to an end and not an end in itself.”

However, the use of open-ended graphic elements acts something like a compositional signature, embedding the composer’s presence within the score. 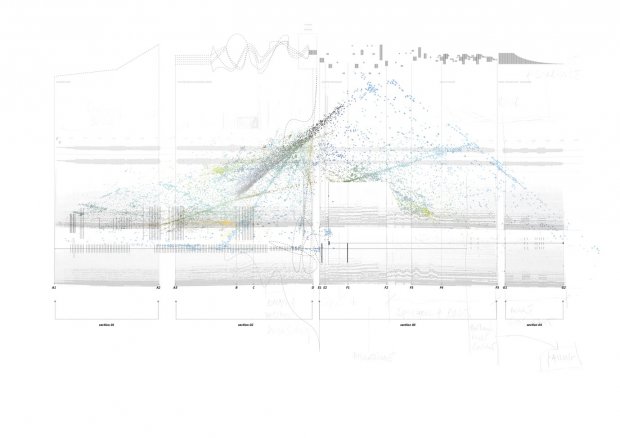 [Caption: This early graphic score, is designed to map out the narrative for DEVICE 001, showing the overall development of texture for the final work.] 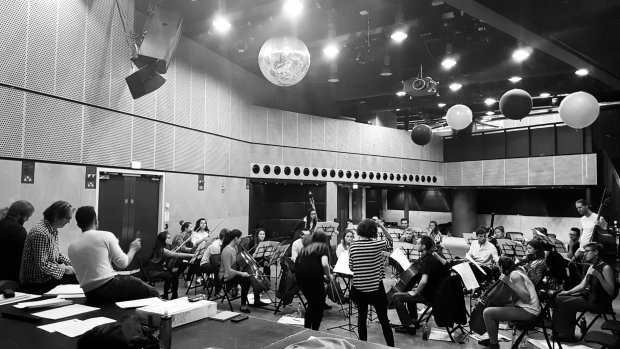 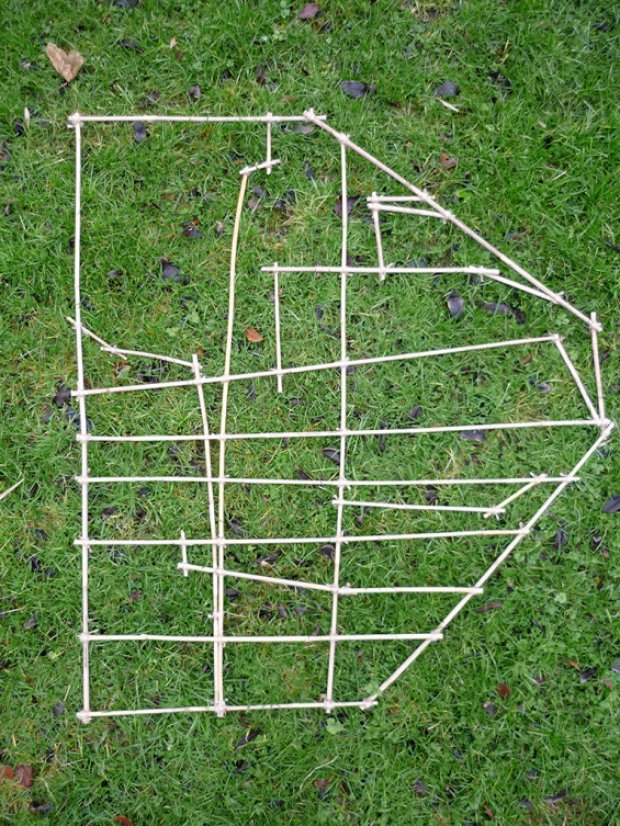 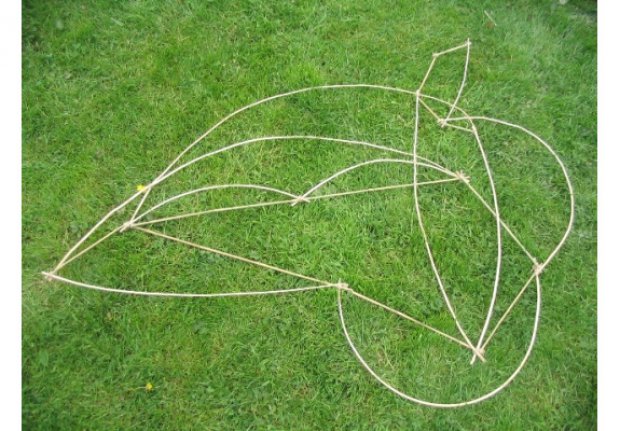 Graphic scores often have a sense of humour about them. There is something deliberately ridiculous about claiming deep conceptual connections between abstract visual shapes and detailed musical gestures, which can make us think critically about the role of the composer.

Jennifer Walshe’s Scintillia (pictured above), scored for solo voice, with film canister and comb, and attributed to one of her Grupat alter egos, Detleva Verens, presents a score created through placing a collection of large bamboo sticks in arrangements on the ground.

Walshe (Verens), further complicating (or satirising) the distance between these sticks and the resultant music, tells us that the various shapes created by the formations of the bamboo are inspired by pictures taken by satellites orbiting the earth in space.

What might be called an artistic “work”, in homage to a seriousness of intent, has become a “play ground”, a fluctuating centre for activity on or around the composer’s own acts of listening and notating.