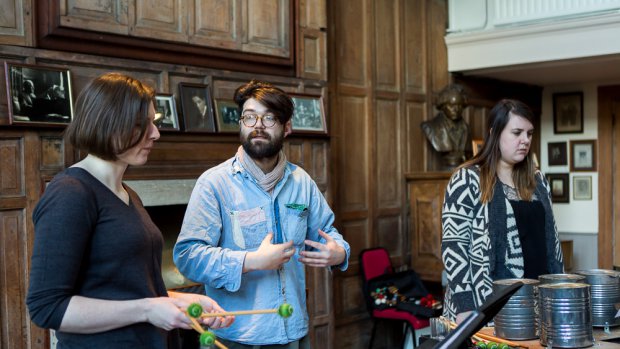 "It seems to me that a compositional practice that plots the coordinates of virtual spaces in which musical bodies appear is playing with a sensorial response to a world that is increasingly toxic and diminishing, dissolving dualistic boundaries, and mapping augmented and reflexive psychophysical states that (can) demonstrate a hyperreal quality."
New Voices

Nick Morrish-Rarity, contemporary composer and Noh Theatre enthusiast, has been working as composer in residence at mu:arts to deliver his final performance, Fukinsei, which ‘explores the precision of movement and physical attunement’. Describing his affiliation with the notion of ‘artist as cartographer,’ Morrish-Rarity reveals how he works with sound to facilitate ‘virtual spaces’ that might induce sensory responses to ‘a world that is increasingly toxic and diminishing.’ Such innovations in sound ‘dissolve dualistic boundaries’ and lead audiences into alternative, yet reflexive, psychological states…

My music is often made with acoustic instruments that can be increasingly found alongside scavenged objects, discarded cultural artefacts, junk materials and found recordings. I’m interested in the materiality of the performing body, ecological approaches to composition, similarity and difference, amongst many other things.

Did you always want to be a composer?

I started writing, arranging and improvising at quite an early stage, although, I’m not sure that I thought that composers really existed today. I used to love trying out new sounds and thinking of instrumental combinations, or turning a piece that I liked on its head, but I never really thought of this as ‘composition’. I definitely preferred making things up than actually practicing. I’d spend a lot of time notating bits and pieces, seeing what worked and what didn’t. After a while, this became a way of facilitating music making with friends, making instrumental tracks and songs, improvising and playing outside of formal or ‘classical’ contexts. I was much more interested in making music with people, being free to make sounds as a group than being tied to a formal score. Through doing so, my listening and musical practice broadened considerably and kind of folded back in on itself to the point that I was exploring instrumental combinations and notational practices that were closer in spirit to 20th century art musics. I guess that I was composing all along without really being aware of being a ‘composer’.

Describe your experience working with mu:arts for your Portfolio project. Did you know anything about Noh before you started?

Working with mu:arts has been a really eye-opening experience. It has been incredibly interesting to work with musicians from a variety of backgrounds, and to explore methods that will undoubtedly find their way into future pieces. Prior to starting the project, my main point of contact with traditional Japanese music had been with gagaku, which I absolutely love and find really fascinating. I had also written a couple of pieces in which I explored particular aesthetic concepts, as presented by Jun’Ichiro Tanizaki in In Praise of Shadows, as a means of conceiving of musical form and texture. Having spent three weeks learning about Noh as a part of the residency last summer, I became increasingly interested in the relationship between violence and reticence that Noh so powerfully presents. The music and theatrical actions are often visceral and direct, with great emphasis placed on attuning to one’s body and the psycho-spiritual aspects of performance. I am now looking to imbue all of my work with this type of focus, which I am sure is a direct result of working on this project.

What has been your highlight of the residency?

Hearing the traditional hayashi (instrumental music) that was performed at Kings Place. The performance was incredibly powerful, and was such a rare opportunity to hear this music being performed so well in London.

What was your Noh performance about?

My piece explores the precision of movement and emphasis on physical attunement, so important in traditional Noh, in an abstracted musical context. The music is at times distilled and emphatic with dynamic contrast creating a sense of movement and motion through a sonic terrain that is in equal part familiar and strange.

What do you intend to do now the project is over?

I’ve got a few bits and bobs coming up – I’m working with the Divertimento Ensemble in Italy in July and will be starting a new piece for Ensemble Nikel to be performed in London in November. I’m hoping to spend the summer workshopping new ideas and trying to collect my thoughts!

Do your own thing. Don’t feel that you need to be anyone other than yourself. Listen – a lot.

Explain your idea of ‘artist as cartographer,’ and why it is important to you.

I am interested in what it means to live and make at a time when humans are having an increasing impact on our environment, when we are aware of massively distributed entities such as global warming and radiation, and when the body has become an alienated and alienating entity as a result. It seems to me that a compositional practice that plots the coordinates of virtual spaces in which musical bodies appear is playing with a sensorial response to a world that is increasingly toxic and diminishing, dissolving dualistic boundaries, and mapping augmented and reflexive psychophysical states that (can) demonstrate a hyperreal quality. This, for me, is akin to a cartography that operates on and across a number of different strata and in a variety of different ways. I recently wrote Junkspace for the Workers Union Ensemble and New Dots, in which some of these ideas are explored, excerpts of which can be found here

Describe your compositional process and where you get your ‘inspiration’ from.

This varies from piece to piece – a piece might start from a very strong sound image, or as the result of lots of listening, reading and writing. It might result from playing with new sounds or instruments. Quite a lot of time is spent scraping, singing and playing instruments badly. I often find that I need the physicality of sound to really get a piece off the ground – then I do my best to keep focused on what I had hoped to achieve, and to find the essence of the idea. This isn’t always successful…

Do you feel that your music has a narrative – what are you translating to your audiences?

No. What I’m interested in translating is the sense that what has been created has a sort of inner life – I’m not quite sure how best to describe this – a particular quality of sound that results in a deeply personal aesthetic experience in which no consideration, other than the sound’s sheer existence, is of any importance.

Really excited by lots of what I’ve heard in the UK recently (too many people to name) but New Voices is probably a good place to start!