Neil Luck on the Occult World of Rosemary Brown
"Rosemary Brown (1916-2001) may be one of the most important, and underrated musicians of her, or indeed any generation."

Rosemary Brown (1916-2001) may be one of the most important, and underrated musicians of her, or indeed any generation.

She was a spiritual adept, a medium who corresponded with the spirits of some of the greatest dead composers in history: Beethoven, Brahms, Bach, Liszt, Debussy etc. Brown acted as an amanuensis, taking dictation and bringing hundreds of new works from the classical masters into existence. With only a very basic musical training and modest piano skills her activities fascinated and baffled some of the greatest musical minds of the day. Although now almost completely absent from the British musical landscape (at best under represented or regarded as curio) she is a fascinating figure whose practice can be appreciated in a number of ways.

Firstly, Rosemary can be seen as a custodian and historian. Curiously, her work flourished around the same time as the early music revival in London was reaching full pace. Unlike the painstaking research-led endeavours of Christopher Hogwood and his contemporaries, Rosemary had unprecedented access to first-hand knowledge and experience. As well as taking down piano pieces, strings quartets and symphonies (Beethoven channelled his 10th and 11th through her in later years), she also received piano tuition from Liszt, Rachmaninov and others. She shed light on the whereabouts of lost manuscripts, identifying one of Monteverdi’s workspaces which contained several unknown operas (sadly, however, the building had long been demolished and manuscripts lost), as well as a collection of pieces by Schubert. In addition, she was able to ask composers about specific aspects of their well-known pieces; Colin Davis famously consulted her (corresponding with Berlioz) about tempo indications in The Trojans. Listen to RB talking about her correspondences here. 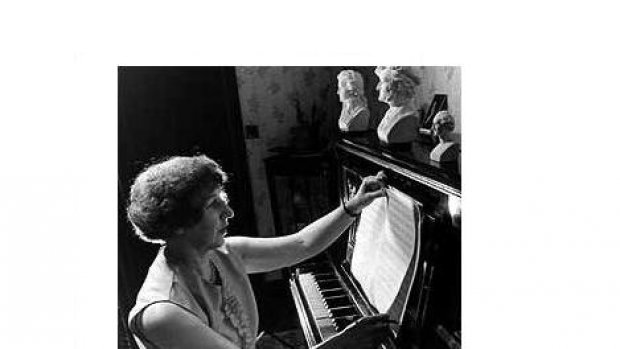 Secondly, Rosemary can be seen as something of a victim. Occult communication is no laughing matter, and her story shares many aspects with other high-profile cases of demonic possession, poltergeist activity, and automatic writing. Indeed, whilst Brown was taking dictation in South London, across town the infamous ‘Enfield Poltergeist’ was terrorising a young family through remarkably similar means: conversing with the residents, possessing the body of the youngest daughter and speaking through her as ‘Bill’, tossing furniture around and any number of other weird goings-on.

On top of an often punishing schedule with the spirits (she would usually work for many hours straight with whoever was communicating with at the time) Rosemary was also subjected to much earthly interference, being the subject of relentless testing, questioning and criticism not least by one the most insidious realms of the media landscape: Light Entertainment TV programming (see video at the top of the page).

Thirdly, it is possible to view Rosemary as a truly iconoclastic composer. In the face of an explosion of new ideas, techniques and ideologies in ‘serious’ music through the 1960s, 70s and 80s, Rosemary carved a truly unique path, pioneering an approach to musical composition wholly original, and (to my knowledge) not imitated since. Indeed, seen in this light, many other artists of the time whose works engaged with ideas of the occult - see Kenneth Anger’s Invocation of My Demon Brother (1969), and Diamond Galas’ The Litanies of Satan (1982) - seem embarrassingly shtick in comparison.

In this sense one could argue that she was on a par with Stockhausen. Karlheinz received similarly otherworldly influences, claiming to have been born and educated (and residing after corporeal death) not on earth, but on the star Sirius. As with Rosemary, these claims should be considered seriously, being as they are key in understanding both individual’s paths to a completely radical rethinking of compositional technique.

Lastly, Rosemary has been seen by many as a fraud, or simply delusional. Her work underwent analysis from leading figures such as Richard Rodney Bennett and Leonard Bernstein who were both equally impressed, mystified, but also dubious of her claims. Rosemary was ridiculed by much of the musical establishment, but clinical psychological testing proved her to be a wholly balanced individual. This is all, however, a moot point; almost all composers, particularly since the mid-twentieth century, have been channelling the dead to some degree. Many have forged successful careers by reanimating musical corpses, piecing together Frankensteinian oeuvres from the ‘bleeding chunks’ of others.

This is a cynical way of looking at ‘new music’ though, and Rosemary’s legacy (as with all great artists) stands up best when we suspend cynicism and logic and just take her word for it. The eminent musicologist Donald Tovey, one of her greatest supporters, perhaps sums this up most eloquently:

There are always those who scoff at that which they cannot or will not understand, and the threat of these Philistines may induce hesitation in some people to place before the world new or unusual ideas and experiences… It is, of course, equally impracticable to be over-credulous; but the credulous by virtue of their very willingness to believe are more likely to be receptive to the truth than their opposite kind. Those who are most likely to block progress in your world are the inveterate sceptics who fondly assume that their immovable intellectualism denotes an ingenious and infallible judgement.

Quote received by Rosemary Brown in 1967

To find more information about Neil Luck and his work please click here:

Neil Luck on the Occult World of Rosemary Brown